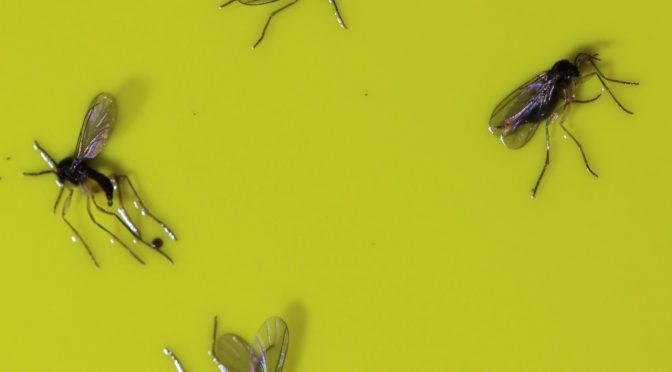 Each year the University of Wisconsin’s Insect Diagnostic Lab receives thousands of arthropod samples and reports from around the state and region, providing a unique perspective into insect and arthropod trends in Wisconsin and beyond.  This post is the first half of a series counting down the top arthropod trends in our area last year.  The second part will be posted in early February and can be found here.

10) Dagger and Tussock Moths:
A few species of fuzzy caterpillars were surprisingly abundant last year and there’s a good chance you might have bumped into these in your own neighborhood.  Two similar-looking yellowish species, the American dagger moth and the white-marked tussock moth, were extremely common around Wisconsin and were two of the most widely reported caterpillars last summer. Another tussock moth associated with milkweed was also surprisingly common in 2018. With many Wisconsinites growing milkweed to attract monarch butterflies, the black and orange caterpillars of the milkweed tussock moth were also noted in abundance around the state last year.

9) Fungus Gnats:
Pick any spot on a Wisconsin map and 2018 was most likely a soggy year. Understandably, rain encourages insects and other creatures that thrive under damp conditions. Last year’s rains created great conditions for fungus gnats, which became quite abundant by late summer. While fungus gnats are harmless to people and pets, they can be an annoyance if present in high numbers. Fungus gnats thrive in damp organic materials, meaning that rich soil, compost piles, and decaying plants can produce masses of these tiny, dark-colored flies. The larvae of these insects can also be common in the soil of houseplants.  As Wisconsinites brought their favorite potted plants indoors in autumn to avoid approaching frosts, reports of indoor fungus gnats were common.

8) Purple Carrot Seed Moth:
With several new, non-native insects showing up in Wisconsin every year, the impacts of each species can vary significantly. Some exotics, like the emerald ash borer make massive waves, while others cause merely a ripple. The impacts of one of our newest invasive insects, the purple carrot seed moth (Depressaria depressana), are not yet fully known. This European species was spotted in Wisconsin for the first time last summer and the tiny caterpillars love to feed on the flowers (umbels) of plants from the carrot family. Below-ground plant structures (e.g., the taproots of carrots) aren’t impacted, but notable damage to herbs like dill, fennel, and coriander can occur. As a result, this pest may be a concern for seed producers, commercial herb growers, or home gardeners with a fondness for dill and related herbs. The purple carrot seed moth has been reported in 8 Wisconsin counties thus far [Brown, Columbia, Dodge, Kewaunee, Milwaukee, Racine, Sheboygan and Washington Counties], so new county-level reports are encouraged at the UW Insect Diagnostic Lab.

7) Odorous House Ants
Imagine the stereotypical black ants zeroing in on sugary foods at a picnic and you’d have a fitting profile of the odorous house ant (Tapinoma sessile). Of the 100+ ant species in the Midwest, the odorous house ant stood out in spring and early summer last year with its sheer abundance. The UW Insect Diagnostic Lab was flooded with calls about these sugar-loving ants during 2018’s rainy spring, especially when these ants wandered indoors. The spring rains may have forced the ants from waterlogged colonies to seek out higher-and-drier locations, making odorous house ants the most commonly reported ant at the diagnostic lab last spring.

6) Stink Bugs:
While the Midwest is home to over 50 species of stink bugs, one particular species—the invasive brown marmorated stink bug—stands out to give the rest a particularly bad reputation. If you live in a part of the state with the brown marmorated stink bug, you may have already encountered this species. With its habit of sneaking indoors in the fall, this insect replaced boxelder bugs in some areas as the top home-invading nuisance pest of 2018. This Asian species has made the diagnostic lab’s Top 10 list for several years now and unfortunately doesn’t show any signs of slowing down. In 2018 alone, BMSB was detected in 8 new Wisconsin counties, which hints at potential damage to fruit and other crops in those areas in the coming years.

To see the rest of Wisconsin’s top arthropod trends of 2018, check out part 2, available here in early February. 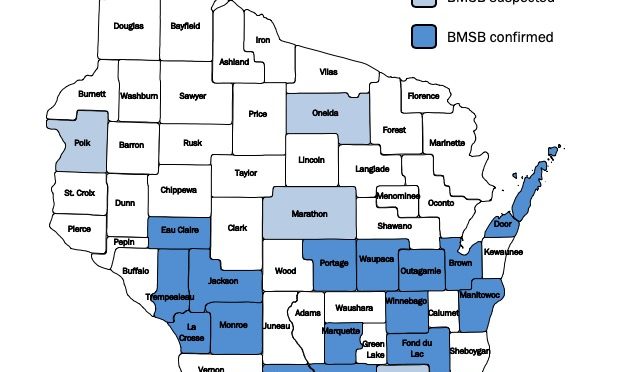 Author’s Note: Original post updated in January, 2019 due to a confirmed report in Waupaca Co. and suspected report in Oneida Co.

One of the most concerning invasive insects to appear in Wisconsin in the last decade is the brown marmorated stink bug (Halyomorpha halys).  This Asian species delivers a double-whammy of not only damaging crops and other plants, but also being a significant nuisance when it sneaks into buildings in the fall. Since its initial detection in the state in 2010, populations of this insect have built up slowly but steadily.

What’s the current status of BMSB in Wisconsin?

As of late 2018, 28 counties have confirmed reports of the brown marmorated stink bug and a handful of other countries have suspected sightings.  This insect has a strong foothold in the state and was confirmed in eight new counties in 2018 alone—Eau Claire, Jackson, La Crosse, Marquette, Monroe, Richland, Trempealeau, and Waupaca counties.

Two core areas currently stand out for brown marmorated stink bug activity in Wisconsin: the Highway 41 corridor from Fond du Lac up to Green Bay and southern Wisconsin from Dane and Rock Counties east to the Milwaukee metro area.  These two areas have the longest history of BMSB in the state and account for the majority of reports thus far.

Much of the state has yet to encounter this insect or truly experience its impacts.  When the brown marmorated stink bug is first detected in an area, there’s a proverbial “calm before the storm”.   The pattern observed in the state thus far has been a few “quiet” years where low initial populations of this insect result in only a few sightings annually.  However, after a few years in a given area, BMSB populations build up to the point where nuisance problems around structures are noted and reports of potential plant damage begin to trickle in.

What’s the Outlook for BMSB?

Unfortunately, Wisconsin has yet to see the full impact of this invasive insect.  Observations over the last few years have found that BMSB is able to survive our winters and reproduce in the state, so this adaptable pest will most likely continue to build its numbers in the coming years.

Over time, the brown marmorated stink bug is likely to emerge as one of the top structure-invading pests in the state alongside the likes of boxelder bugs and multicolored Asian lady beetles.  In the eastern US, where BMSB has been established for over a decade in spots, problems can be significant.  In some cases these malodorous insects have been documented invading homes by the tens of thousands.

While widespread crop damage has not yet been observed in Wisconsin, it may only be a matter of time as population of this insect continue to build in the state.  Agricultural problems have also been significant in the eastern US, giving us a glimpse into what could potentially happen in coming years.  For example, brown marmorated stink bug caused $37 million dollars in losses to apples in the mid-Atlantic states in 2010 alone.

Having been detected in Portage County in 2017, brown marmorated stink bug may soon start to pose a threat to vegetable production in central Wisconsin.  Similarly, specimens confirmed from Door County in 2017 are forcing fruit growers in that part of the state to keep a close watch on their orchards and vineyards.  With the recent detection of BMSB in several western Wisconsin counties, we’ll likely see BMSB populations slowly build in that part of the state over the next few years as well.

What should you do? 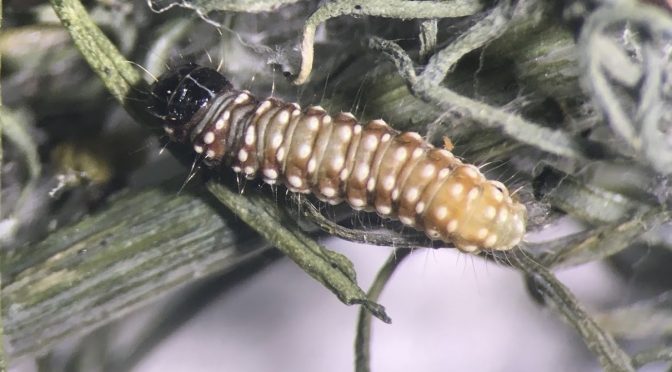