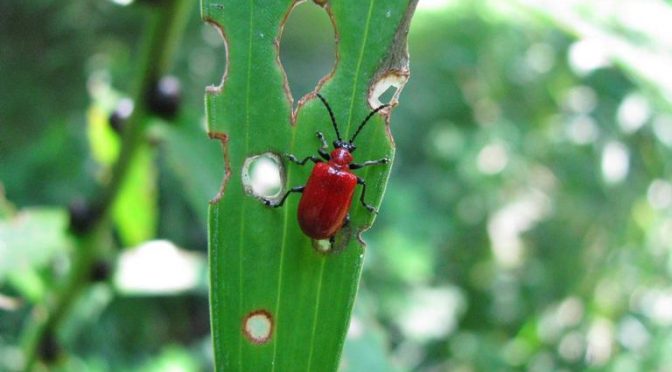 It’s been a big year for the lily leaf beetle (Lilioceris lilii) in Wisconsin.  The lily leaf beetle (or scarlet lily beetle) is an invasive Eurasian species that made its first appearance in the state back in 2014.  This species originally showed up in North America around the time of World War II, arriving in eastern Canada with shipments of plant materials.  It eventually spread into New England in the 1990’s and has been moving westward ever since.  True to its name, this species has a fondness for lilies and can cause significant damage to true lilies (Lilium spp.), including both native lilies and cultivated types. Fritillaries (Fritillaria spp.) can also be attacked by the lily leaf beetle, as well as lily of the valley (Convallaria majalis) and Solomon’s seal (Polygonatum spp.) to lesser extents.  Daylilies (Hemerocallis spp.), canna lilies (Canna spp.), and calla lilies (Calla palustris) are not attacked.  The damage caused by lily leaf beetle can be severe.  Since its arrival roughly five years ago, some commercial flower growers in parts of Wisconsin have stopped growing and selling lilies altogether.

Adult lily leaf beetles are only about a quarter of an inch long but pack a punch when they chew irregular holes and notches in lily leaves, stems, and developing buds.  If there’s a redeeming quality of this invasive insect, at least the adults are a conspicuous bright red color.  However, when disturbed the beetles readily tumble from plants, and land upside down on the ground where they play dead.  Their dark-colored underside makes them much harder to spot when this occurs.

If it weren’t for their destructive nature, one might even consider the vibrant red beetles rather pretty.  It’s hard to say the same of the larvae though.  Lily leaf beetle larvae are a pale yellowish color with a black head capsule and approach nearly half an inch long.  However, as a defensive behavior, the larvae typically camouflage themselves with their own excrement and look more like slimy greenish slugs or ooey-gooey animal droppings than insects.  Just like the adults, the larvae cause significant damage as they chew holes and notches in lilies.

While pests like the Japanese beetle don’t make their appearance until well into summer, the lily leaf beetle can be a threat throughout the entire growing season.  This insect overwinters in the adult stage and the bright reddish beetles can emerge and start feeding early in the spring.  After mating, female lily leaf beetles lay tiny reddish eggs on the underside of leaves.  Eggs are often laid in batches of a dozen or fewer, but the long-lived females can lay hundreds of eggs in their lifetimes.  The emerging larvae start feeding and can be common during spring and early summer.  After gorging themselves for a few weeks, larvae eventually wander from plants to pupate in the soil.  The next batch of adults will be present through the summer and fall months.

If you haven’t encountered this insect yet in Wisconsin, it’s not too surprising.  The majority of the state has yet to see the lily leaf beetle—but that will likely change in the coming years.  When it was first detected in the Wausau area in 2014, lily leaf beetle was found nearly simultaneously in a number of spots around the county, suggesting that it may have been spread by the movement of infested plant materials.  Human movement of these insects remains an important factor today.  Since its introduction, the lily leaf beetle has steadily been spreading around central Wisconsin through both human and natural movement. Alarmingly, in the summer of 2019, the lily leaf beetle made some significant “jumps” and was detected in Dane and Door counties.  In early October, colleagues at DATCP confirmed the first detection of LLB from Pierce County.  This discontiguous pattern on the map points to human movement as a likely cause.  Unfortunately, these detections represent new footholds in Wisconsin and residents of those areas now need to be on alert for this invasive beetle.

Since the earliest days of mankind, we’ve excelled at exploring and expanding our presence to nearly every spot on the map.  With all our wanderlust, we’ve been equally adept at taking other species with us as we go—often with unintended consequences.

In some situations, species have been deliberately moved by humans: livestock to the new world, the introduction of birds from Shakespeare’s plays into Central Park,  and even the notorious gypsy moth was transported from Europe in a failed attempt at an American silkmoth industry.  On top of that, there’s an extraordinarily long list of species that have been accidentally moved, with significant impacts.  Stowaway rats on the ships of European explorers and traders would be one of the most notorious examples.  Rats introduced to new island environments wreak havoc on native birds and reptiles by devouring vulnerable eggs.  Insects have also been transported around the globe with devastating results and some of North America’s most important and emerging insect pests originate elsewhere on the planet: Japanese beetle, emerald ash borer, brown marmorated stink bug, and the spotted lanternfly.

One of the insects best adapted to follow humans is the notorious mosquito.  Certain mosquito species (peridomestic species) possess traits that allow them to take advantage of conditions in areas disturbed by humans and thrive in those spots.  With humans came environmental modification, construction, and discarded trash of one kind or another.  Some mosquitoes might have originally relied on the water pooled in natural containers, such as rotted out tree stumps to reproduce, but can just as easily take advantage of water-filled containers, ditches, and other artificial habitats.

In modern times, automotive tires have become a key habitat for certain mosquito species.  Tires not only are perfect objects for holding water for extended periods, but they also provide the dark, sheltered habitat favored by some female mosquitoes looking to lay eggs.  Tires are an important way for mosquitoes, like the Asian Tiger Mosquito (Aedes albopictus) to be moved into and around the US (including the Midwest).  Other species, like the Asian Rock Pool Mosquito (Ochlerotatus japonicus), are also easily transported in human materials.

A recent case at the UW Insect Diagnostic Lab illustrates the ease with which non-native mosquitoes can be moved around the country.  In the first part of 2018, stores have been selling hyacinth bulbs in vases pre-filled with water as a way to force the bulbs to bloom into a flash of color during the dreary winter months.  In a recent discovery in southeastern Wisconsin, a vase purchased at a local store ended up yielding half a dozen larvae of the non-native Asian rock pool mosquito.  The exact origin of the mosquitoes isn’t known at this time.

These mosquitoes won’t be much of a concern in the grand scheme of things as Ochlerotatus japonicus has been present in Wisconsin for over a decade and is already established here.  However, such cases do leave open the possibility of non-native mosquitoes being moved into parts of the country where these pests have not been encountered before.  Where humans go, pests will boldly follow.

Ask any gardener or landscaper in the Midwest what their least favorite insect is, and the Japanese beetle will probably be near the top of the list.  Think of the plants that this insect feeds on: ornamental trees and shrubs like lindens, birches, crabapples, and roses, fruit crops like apples, pears, plums, raspberries, and strawberries, and garden and vegetable crops like beans and corn, as well as hundreds of other plants.  It’s no wonder gardeners have to be on alert for this insect.

So why the resurgence of Japanese beetle activity in 2016?  Every winter, a common topic I’m asked about is my “insect forecast” for the coming year.  Before winter had even ended, there was good reason to believe that the Japanese beetle would pop back up the state in 2016–and Mother Nature may be the cause.  Japanese beetle larvae (white grubs) spend the winter in the soil below ground.  In July, August, and September, these grubs can be found in the upper portion of the soil where they feed on the roots of turfgrass.  As winter approaches, the grubs tunnel deeper into the soil where they avoid being killed by a hard freeze.  In most parts of Wisconsin, we had a reprieve from Japanese beetles the past two years.  I suspect this may be due to the brutal winter of 2013-14, which had some extended periods of sub-zero temperatures.  It’s quite feasible that this deep frost killed many grubs and led to lower adult populations the following summer (2014).  Given enough time, the Japanese beetle populations were destined to rebound at some point, and the mild (el-Niño) conditions this past winter might have been just what they needed to bolster their numbers.  Unless we face another brutal winter in the next few years, I suspect that Japanese beetle numbers will be up for the foreseeable future in the state.

Ironically, there’s an important milestone to recognize for this invasive pest this year–the Japanese beetle was detected for the first time in New Jersey 100 years ago, in 1916.  Slowly, but surely, this insect spread through many parts of the eastern US, and has been spotted on occasion in isolated spots in the western states.  We also have an interesting history of Japanese beetles in Wisconsin.  Technically, our first detections occurred in the southeast part of the state in the 1960’s, although these populations struggled to take hold.  At the time, this seemed to be a comforting sign–perhaps, our famed “frozen tundra” was simply too cold for them.  However, by the 1990’s, Japanese beetles had gotten a solid foothold in the state and they’ve been around much to the chagrin of gardeners ever since.

I think it’s safe to say that just about everyone knows and appreciates honey bees (who doesn’t love honey after all). Humans have a long history with honey bees and European settlers purposefully brought them over to the Americas. However, there’s another piece of the pollinator picture which is often overlooked and under appreciated: our many native bees.

How could they go unnoticed? A bee’s a bee, right?
Not quite—If you take the time to learn about Wisconsin’s bees, you might be surprised to discover that we have approximately 500 species of bees in Wisconsin alone. (Then there are the many flies and wasps that are often mistaken for bees, but I’ll save mimicry for another day.)  A common example of a native bee would be the metallic green “sweat bees” (Family Halictidae), although many different species exist within that family alone.

Most of our bee species are native, solitary creatures with their own unique habits.  With their solitary nature, each female makes her own nest and there’s no colony of relatives to defend (unlike honeybees).  With that said, our native bees tend to be rather docile, allowing for plenty of opportunities to observe them foraging at flowers or constructing their nests. Depending on the species, our native bees tend to nest in the ground (the females dig tunnels) or inside of hollow chambers.  These hollow chambers could be a tunnel made in wood or a hollow plant stem. Regardless of the nesting site, the story is similar: the female bees gather food (pollen and nectar) to stash away in the nests for their young. Depending on the species of native bee and the type of plants in the area, native bees can actually be more effective at pollinating than honey bees. Thus, the importance of these native bees is often overlooked and under appreciated.

Like honey bees, many native bees are facing declines for a number of reasons. One of the best things to do is to learn about native bees and other pollinators and to make your yard pollinator friendly by providing floral resources and nesting habitat.