On average, 2–3 new, non-native insect species are detected in Wisconsin every year at the UW Insect Diagnostic Lab.  Many of these are minor pests or or mere curiosities, but some can become established pests.  This page is designed to serve as a resource to show the county-level distribution of some of the more noteworthy insect arrivals of the last 10-15 years.  If you think you have found additional county-level records of any of these pests, please contact PJ Liesch at the UW Insect Diagnostic Lab to verify.

Each map can be clicked to view a larger version.

Emerald ash borer is perhaps the most significant invasive insect species the Midwest has seen in our lifetime.  EAB was first confirmed in Wisconsin in 2008 in the SE corner of the state.  To date, 65 Wisconsin counties have had confirmed EAB detections.  Nine counties, all in the northern third of the state, have not yet had detections of EAB. 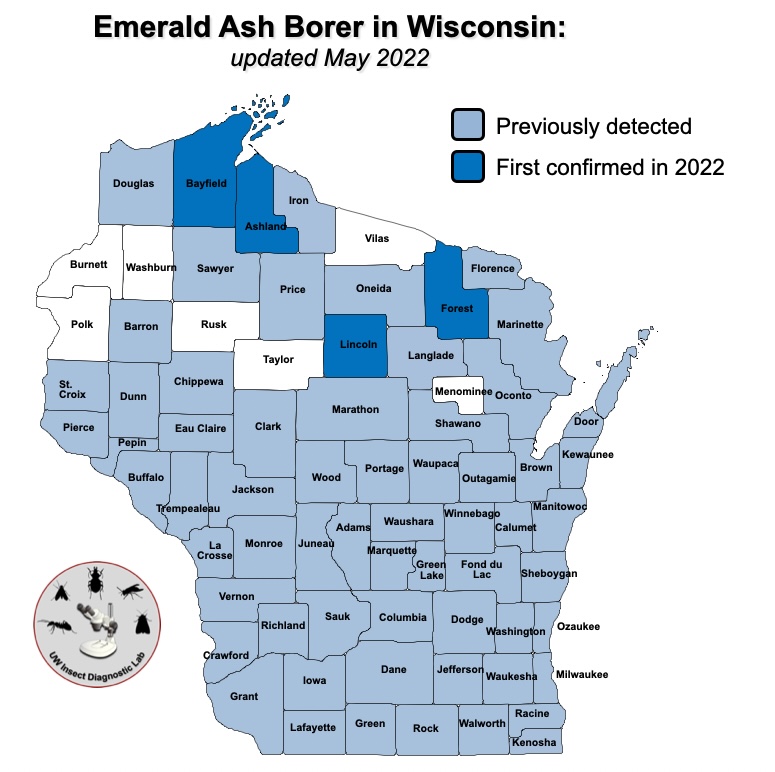 In addition, the Wisconsin Department of Agriculture, Trade and Consumer Protection (DATCP) has a more detailed, interactive EAB map, which can be found here.  To date, EAB is well established in the southern half of Wisconsin with more isolated detections in northern parts of the state.

Brown marmorated stink bug was first spotted in Wisconsin in 2010.  For several years, the BMSB situation was relatively quiet, with only a few reports each year.  However, by 2015-2016 BMSB had a strong foothold in certain parts of the state and is now abundant in some areas.  In particular, most of the reports of BMSB at the UW Insect Diagnostic Lab come from three areas: 1) Dane/Rock Counties, 2) the Greater Milwaukee/Waukesha area, and 3) the Fox Valley / Hwy 41 Corridor (Oshkosh to Green Bay). 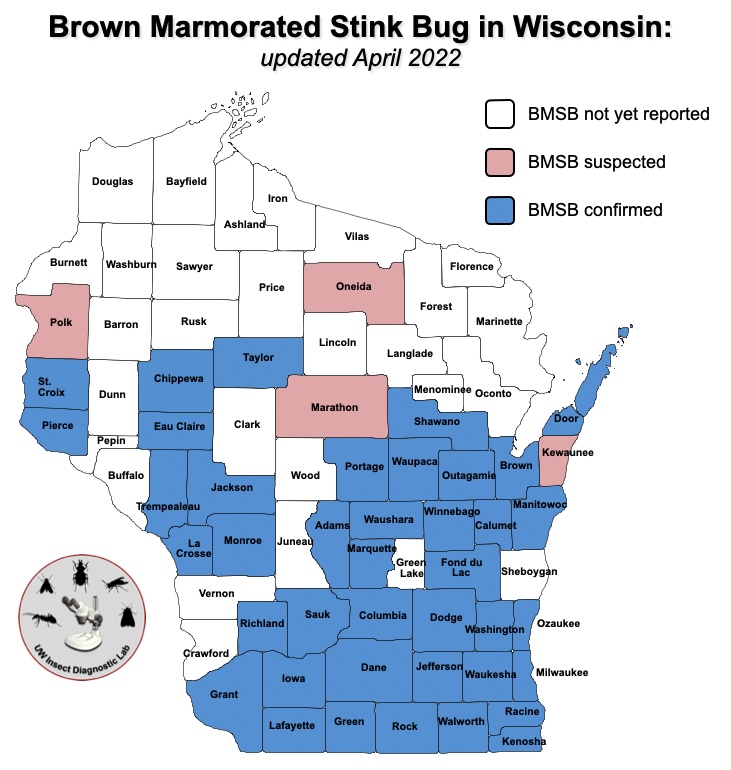 The lily leaf beetle was first confirmed in the state in 2014 in the Wausau area.  This insect can be a significant pest of true lilies.  Several simultaneous detections in different parts of Marathon County in 2014 suggest that this pest may have been introduced with infested plant materials.  For a few years there was slow spread around north-central Wisconsin.  However, by 2019 we saw some big “jumps” on the map most likely due to movement of these insects by humans.  The most recent “jump” has been to the Milwaukee metro area in SE Wisconsin in 2020. 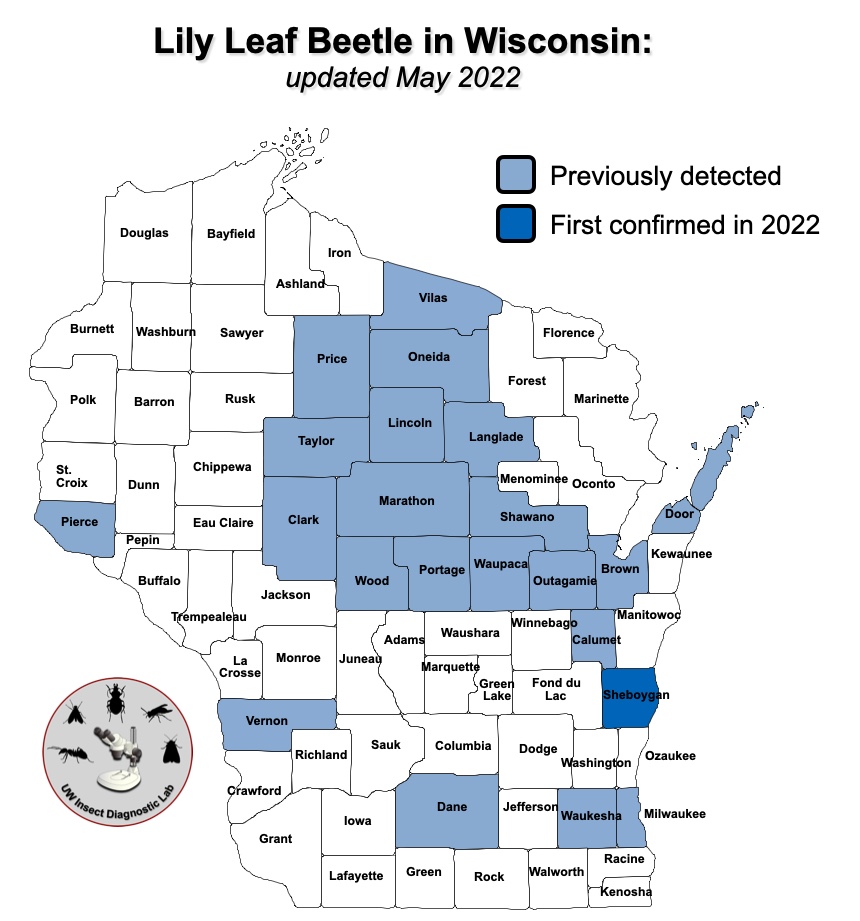 A close relative of the lily leaf beetle, the viburnum leaf beetle can be a significant pest of viburnum shrubs and is particularly damaging to our native viburnums.  Like LLB, the first established infestation of the viburnum leaf beetle was detected in Wisconsin in 2014.  This initial VLB infestation was found near the Milwaukee/Ozaukee county border and the heaviest presence occurs in southeastern Wisconsin.  There have also been some notable “jumps” on the map likely due to human movement and a heavy presence is also known from Dane county. 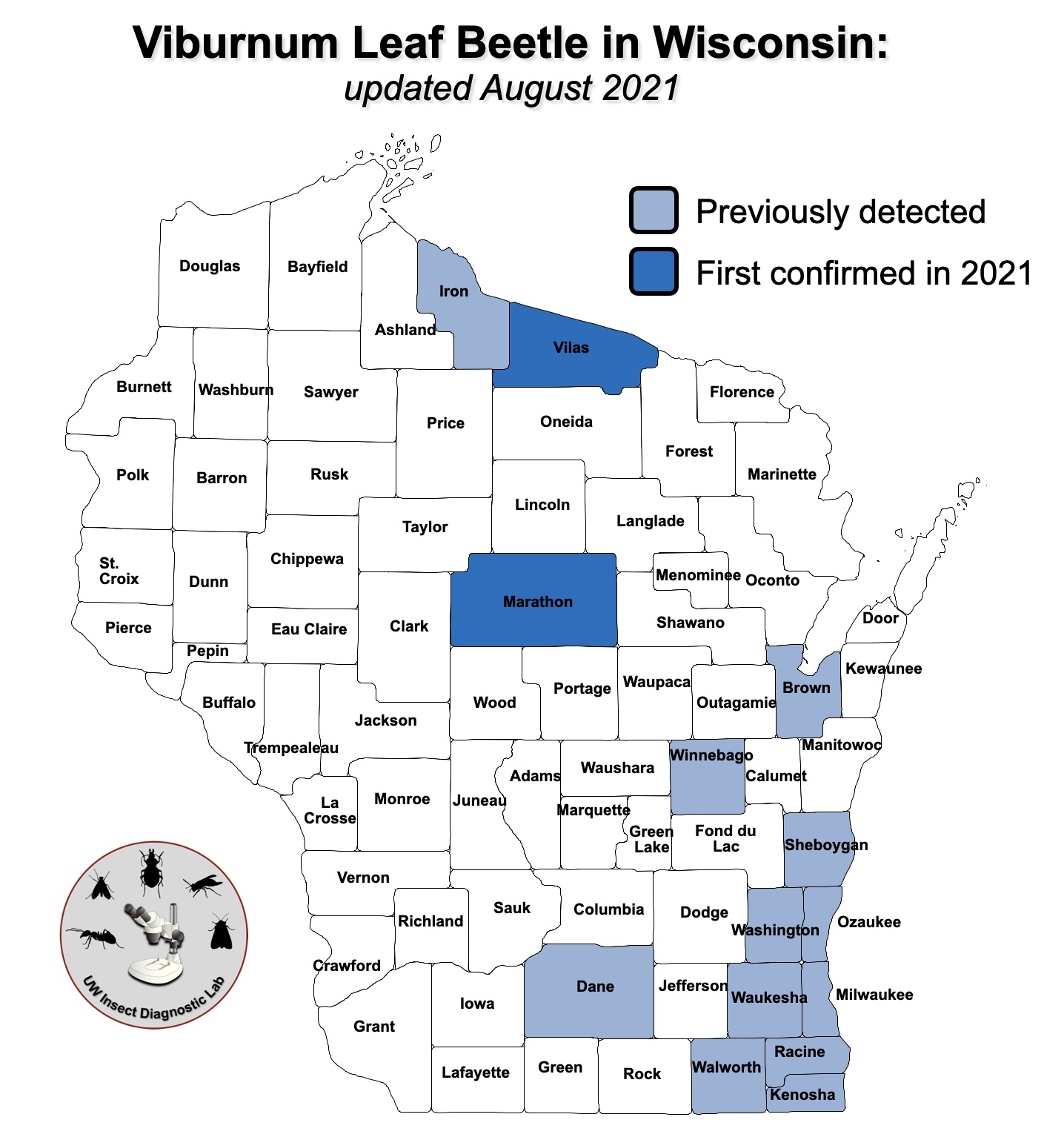 The purple carrot seed moth was first detected in Wisconsin in 2018 and is now widespread in the southeastern quadrant of the state.  After observing this pest for a few years in Wisconsin, the overall impacts seem to be relatively minor and PCSM primarily seems to be a pest for home gardeners.  This insects only attacks the umbels (flowers) of plants from the carrot family, with most reports known from dill in home gardens.  This insect is also known from Queen Anne’s lace.  Since other plant structures (such as roots) are not harmed, crops such as carrots aren’t affected (unless being grown for seed). 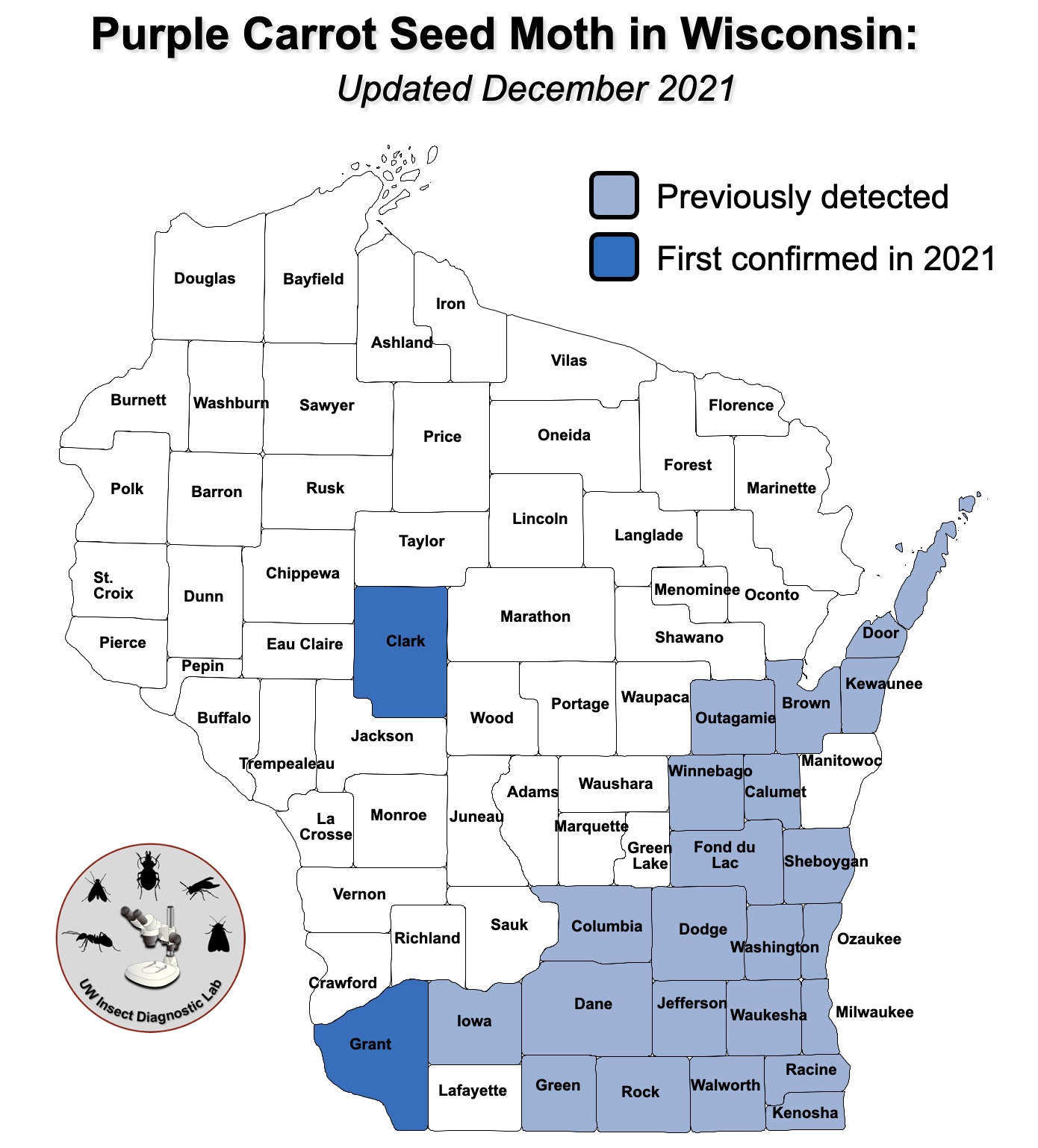 The Asiatic garden beetle was a newcomer in 2021 with only a handful of specimens collected in the state thus far in Dane County.  No plant damage has been reported to date, but this insect is known to be a pest of field and vegetable crops as well as landscape trees, shrubs, and other ornamental plants.  AGB has a strong foothold in the Chicago area and could be knocking at the door of SE Wisconsin in the near future. 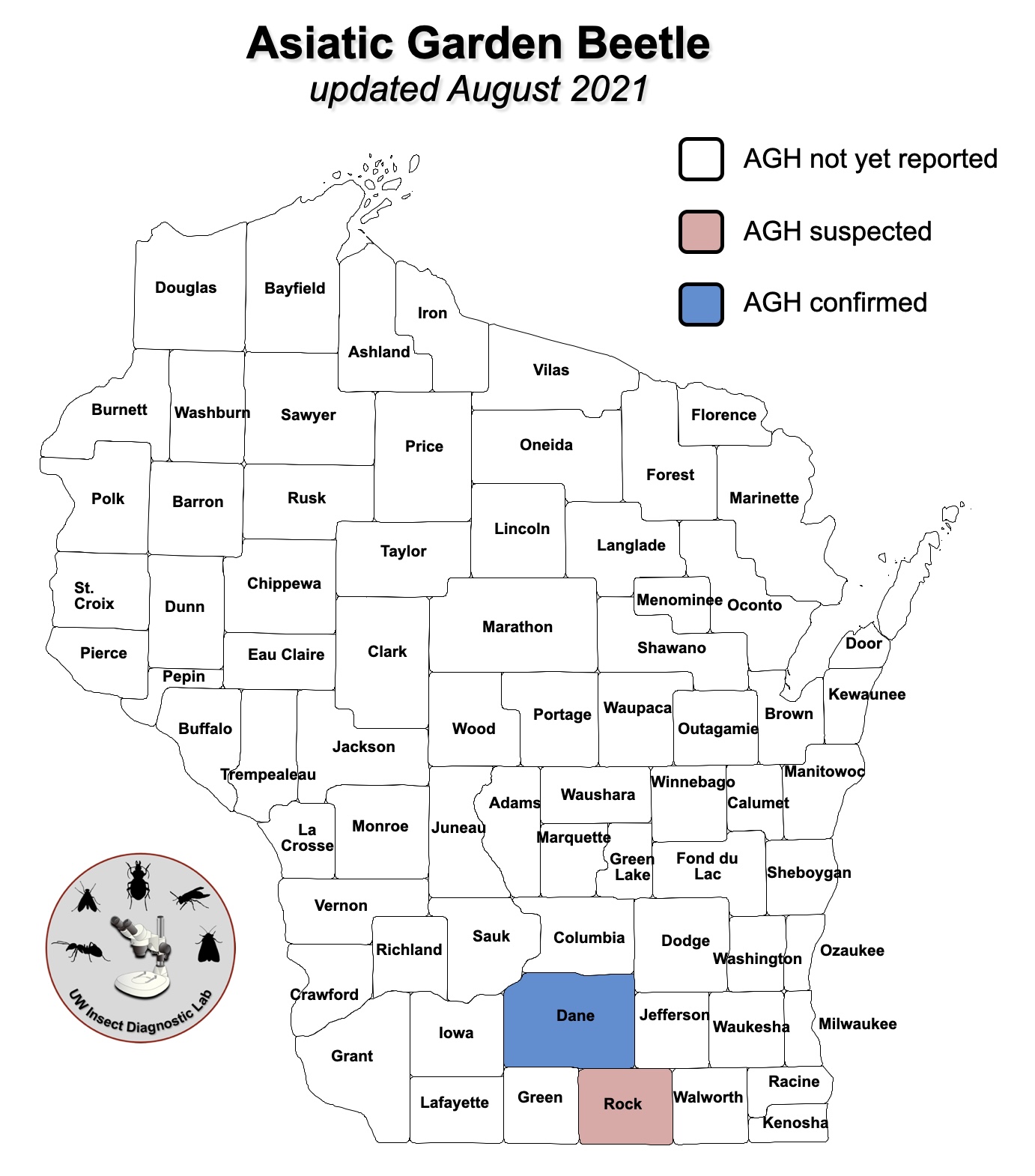