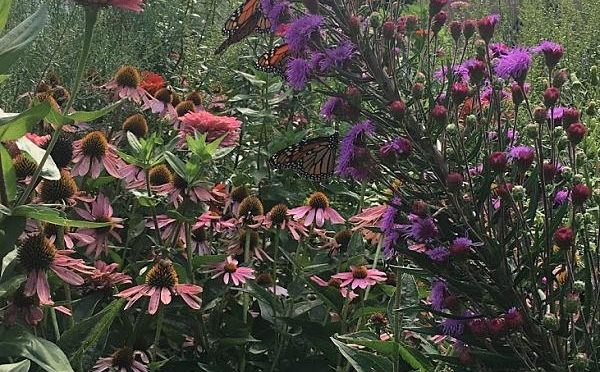 In this post, we’re continuing to count down the University of Wisconsin Insect Diagnostic Lab’s top arthropod trends of 2018. This is the second half of a two part series; the first half can be found here.

5) White-Lined and Other Sphinx Moths:
The white-lined sphinx moth (Hyles lineata) can be a common species, so encountering one of the 3 inch long hornworm caterpillars isn’t unusual. However, these caterpillars can also be encountered in massive road-traversing hordes if the conditions are just right. From midsummer onwards, large numbers of these caterpillars were observed around the state—in some cases by the tens of thousands. If you didn’t spot any of the caterpillars themselves, you might have encountered the large adult moths with their hummingbird-like behaviour in late summer. Several other sphinx moths species also had a strong presence in 2018, such as the clearwing hummingbird moths and the tobacco and tomato hornworm caterpillars which can regularly be encountered in gardens as they munch away on tomato and pepper plants.

4) Sawflies:
Sawflies, the caterpillar copycats of the insect world, are a diverse group, so they’re always present to some extent. Last year saw an unexpected abundance of two particular types in Wisconsin—the dogwood sawfly and the non-native Monostegia abdominalis, which feeds on creeping Jenny and related plants from the loosestrife group (Lysimachia species). While sawflies are plant feeders, dogwood sawflies can also damage the soft wood of a home’s siding or trim when these insects excavate small chambers to pupate in. The UW Insect Diagnostic Lab saw a distinct bump in reports of wood damage from the dogwood sawfly last year.

3) Armyworms:
True armyworms (Mythimna unipuncta) can be a dynamic and sporadic pest in the Midwest. This species doesn’t survive the cold winters of our area, so adult armyworm moths must invade from the south each spring. Depending on national weather patterns, the arrival of the adult moths can vary significantly from year to year. If an early mass arrival is followed by abundant food and ideal conditions for the ensuing caterpillars, large populations can result. Once they’ve arrived, true armyworms can go through 2-3 generations in the state and this second generation of caterpillars made an alarming appearance in mid-to-late July. Under the conditions last summer, massive hordes of these caterpillars decimated crop fields before marching across roads by the tens or hundreds of thousands to look for their next meal. In some cases, that next meal included turfgrass, meaning that some Wisconsinites came home from work to biblical hordes of caterpillars and half-eaten lawns in late July.

2) Monarch Butterflies:
Much to the delight of fans and conservationists, the iconic monarch butterfly (Danaus plexippus) appeared to have a banner year in the Midwest in 2018. Reports and observations of high numbers of monarchs poured into the Insect Diagnostic Lab during the summer months. As comforting as these reports were, the butterflies still faced a perilous 2,000 mile journey to reach their overwintering grounds in Mexico.  The most consistent measurement of the eastern monarch population comes from estimating the area occupied by the densely-packed overwintering butterflies.  In late January the latest count was released with encouraging news—the eastern monarch population is up 144% over last year and is estimated to be the largest in over a decade.  In contrast, the western monarch population overwinters in southern California and has recently dipped to alarmingly low numbers. Regardless of the winter assessments, monarchs face tough challenges and Wisconsinites are encouraged to help conserve this iconic species.  The Wisconsin Monarch Collaborative recently launched a website with resources for those wishing to join the effort.

1) Floodwater Mosquitoes:
Mosquitoes snagged the top spot on 2018’s list for good reason. The upper Great Lakes region is home to over 60 different mosquito species, but one subset—the “floodwater” mosquitoes—drove the storyline last year and impacted outdoor activities through much of the spring and summer months. Mosquitoes in this group, such as the inland floodwater mosquito (Aedes vexans), flourish when heavy rains come. Last year’s mosquito season kicked off in force with a batch of pesky and persistent floodwater mosquitoes just before Memorial Day weekend. Mosquito monitoring traps in southern Wisconsin captured record numbers of mosquitoes shortly thereafter. Later in the year, the Midwest experienced an unprecedented series of severe rainstorms, setting the stage for an encore performance of these mosquitoes. It was this second explosion of mosquitoes that caught the attention of anyone trying to enjoy the outdoors in late summer—a time of the year when mosquitoes are typically winding down in the state.