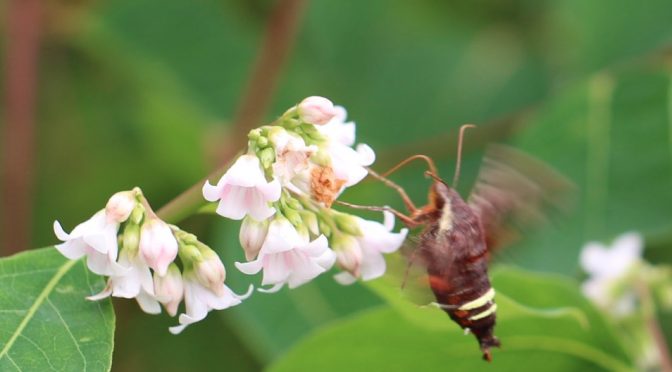 If you’ve watched the flowers in your yard or local park recently, you might have noticed some surprising visitors hovering at the flowers—the hummingbird-like sphinx moths.  Several species in the “sphinx” or “hawk” moth group (Family Sphingidae) are known for their day-flying, hummingbird-like behavior.  From a distance these moths can easily be mistaken for hummingbirds as they skillfully maneuver from flower-to-flower sipping nectar with their long mouthparts.

One of the commonest members of this group in Wisconsin is the white lined sphinx moth (Hyles lineata).  With a wingspan of nearly 4 inches, it’s easy to understand why this species can be mistaken for a hummingbird as it feeds.  The greyish adults are easy to pick out and a white stripe on each forewing helps identify them in the field.  The caterpillars (hornworms) of this species reach nearly 3 inches in length and can feed on a wide range of plants.  While this species is regularly encountered in the Midwest, this year has been especially good for white-lined sphinx moths in Wisconsin.  In mid-to-late July I received many reports of the caterpillars—sometimes in astounding numbers.  In several instances, “outbreaks” of tens of thousands of these large caterpillars were spotted as they migrated across roadways from agricultural fields.  The multitudes of caterpillars have since pupated and transformed into nectar-loving moths—leading to a recent spike of sightings.

In addition to the white-lined sphinx moth, several other hummingbird-like sphinx moths have been common this year—the “clearwing” hummingbird moths (Hemaris spp.) and the Nessus sphinx moth (Amphion floridensis).

The rusty-colored “clearwing” moths (Hemaris spp.) are smaller than the white-lined sphinx moth, and have a wingspan of approximately 2 inches.  Their shaggy appearance and patches of yellow coloration lend a resemblance to large bumble bees.  Characteristic transparent “windows” in the wings help identify these moths.  Several Hemaris species can be encountered in the Great Lakes region with subtle differences in appearance and biology.  Both the “hummingbird clearwing” (Hemaris thysbe) and the “snowberry clearwing” (Hemaris diffinis) can be common, while the “slender clearwing” (Hemaris gracilis) is associated with pine barrens and is rarely encountered.

The “Nessus Sphinx” (Amphion floridensis) is another hummingbird mimic that was commonly reported earlier in the summer.  Although somewhat similar in size and coloration to the Hemaris clearwing species, the Nessus sphinx moth has opaque wings and two distinct yellow bands across the abdomen.

In addition to being a joy to observe, sphinx moths are a great example of “non-bee” pollinators.  Their unique behavior and anatomy allows them to form interesting relationships with some of the plants they pollinate.  In an extreme example, the Christmas Star Orchid (Angraecum sesquipedale) from Madagascar possess extremely long tube-like floral structures which contain the nectar.  Upon learning of the unique anatomy of this orchid, the famed naturalist Charles Darwin speculated that a moth with equally long mouthparts must exist to pollinate them.  It took over a century to document, but a sphinx moth wielding foot-long mouthparts was finally observed pollinating the Christmas Star Orchid.