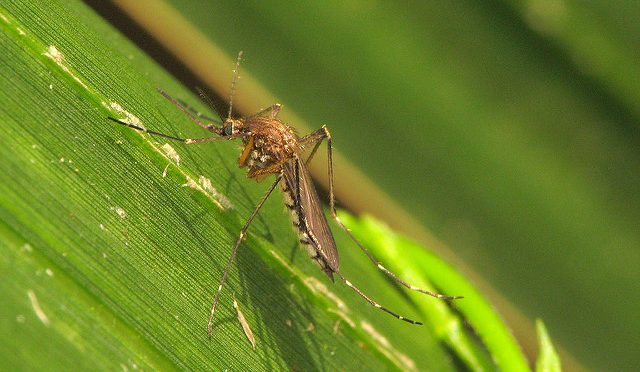 While much of our insect activity in the Midwest slows down as summer draws to a close, some areas have seen an unusual increase in mosquito activity recently.  In Wisconsin, we generally expect mosquitoes to be “bad” from late spring through the summer months, but these pesky sanguivores typically fade away as autumn approaches.  September of 2018 has definitely bucked the trend, and mosquito pressure has been very high in many parts of the state and region this month.

As with other mosquito stories, the common denominator is water—in this case, the unprecedented rainfall events in late August and early September.  During this time, a series of storms dropped heavy rains across large swaths of Wisconsin and surrounding states.  Much of Wisconsin received several inches of rain, and some southern counties were bombarded with 10+ inches of rain in short periods of time.  Devastating flooding ensued, and it was only a matter of time before the mosquitoes responded as well.

Surprisingly, not all mosquitoes can take advantage of floodwaters and some species have a strong preference for more permanent bodies of water, such as tree-holes, man-made objects, marshes, and other areas that can hold water for weeks or months on end.  Out of the 60+ mosquito species in the Midwest, it’s a much smaller subset that has flourished lately—a group appropriately called the “floodwater mosquitoes” for their ability to use temporary water sources to their advantage.  Members of this group, including the currently-abundant “inland floodwater mosquito” (Aedes vexans), tend to lay eggs in low-lying areas without water.  Laying eggs away from water may seem like a counterintuitive strategy, but the hardy eggs simply bide their time until heavy rains arrive—in some cases, years later.

Relying upon temporary resources can be a risky strategy; if the waters dissipate too quickly,  stranded larvae or pupae can be doomed.  Floodwater mosquitoes have evolved to race against the clock, with eggs that hatch shortly after exposure to water, followed by hasty growth and development.  Under the right conditions, it can take less than a week for these mosquitoes to make it to the adult stage.  This scenario is exactly what played out in our area—the rains came, followed shortly thereafter by hungry adult mosquitoes.

With the unseasonably high mosquito pressure this September, one of the commonest questions has been, “when will it stop?!”  While the mosquitoes have undeniably been bad lately, we’re past the worst of the situation.  Mosquitoes and other insects are “cold-blooded” creatures, so there’s a general relationship between warmer temperatures and insect activity. Most of our insects in the Midwest become lethargic when temperatures dip into the 50s; below 50˚F mosquitoes are often too lethargic to fly, let alone pursue a blood meal.  We saw unusually high mosquito activity in early- and mid-September when temperatures remained in the 70s and 80s most days.  Looking at the weather for the near future, many parts of Wisconsin are expecting more seasonal temperatures, which will provide relief.  Mosquitoes might still be encountered on warm fall days, but evening temperatures may simply be too chilly for mosquitoes to go about their business and impending frosts will be the final “nail in the coffin” for September’s floodwater mosquitoes.

In the meantime, the best way to deal with the late season mosquitoes may be to embrace “flannel season” and put on some long-sleeved layers as a physical barrier to bites, and use  EPA-approved repellents as needed (such as on warm days).  Avoiding prime mosquito feeding times (dawn/dusk) and good mosquito habitat can help you avoid bites as well.  It may be sad to see summer go, but the changing leaves and cooler temperatures also signal the winding down of mosquito activity for the upper Midwest.