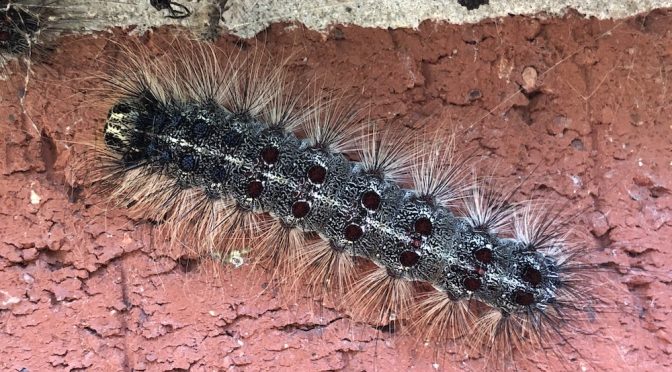 The spongy moth, Lymantria dispar has recently been in the news because of its new name. If you haven’t heard of the “spongy moth” before, it’s probably because you learned of this insect as the “gypsy moth”. It’s the same exact creature, just with a new common name.

Why the change? The word “gypsy” in this insect’s name was originally a reference to persons of Romani descent—“the popular name of the gypsy was no doubt suggested by the brown, tanned kind of color of the male” [Forbush & Fernald, 1896]. In 2021, the Entomological Society of America’s Better Common Names Project started to review the common names used to communicate about insects. Common names that include derogatory or inappropriate terms are being assessed. After a lengthy review process, the term “spongy moth” was ultimately decided upon to describe Lymantria dispar—and fittingly so. The beige egg masses of this insect have a soft, spongy consistency. In French-speaking parts of its range, this species has long been known as La Spongieuse for this very reason. Thus, you’ll be hearing more about the “spongy moth” over time as the term “gypsy moth” is phased out from educational/government websites and other resources.

In addition to the name change, the spongy moth should be on our radar for other reasons. Despite being in Wisconsin for decades, this pest can still be a serious defoliator of hardwood trees, both in yards and forested areas. From the period of 2014 – 2020, spongy moths haven’t been much of an issue. An important reason for this is a beneficial fungus known as Entomophaga maimaiga. This fungus was introduced from Japan and it is strongly associated with the spongy moth. Although it took some time to make an impact in the US, this fungus is now viewed as an important “check” on spongy moth populations. Spring rains encourage this fungus, which can cause high mortality amongst spongy moth caterpillars. However, in many parts of Wisconsin we saw an unusually dry year in 2021 which likely curbed the impacts of this fungus. As a result, I saw an increase in cases and reports of spongy moth caterpillars and their damage, adults, and egg masses at the UW Insect Diagnostic Lab last year and Wisconsin also saw a subtle uptick in defoliation of forested areas.

As illustrated in the chart above, spongy moth populations can be very dynamic and can explode under the right conditions—leading to extensive defoliation. The egg-laying strategy of this species plays an important role in this dynamic. Adult female spongy moths deposit egg masses that can easily contain upwards of 1,000 eggs. In late summer and fall of 2021, I saw plenty of reports where trees contained dozens of egg masses, which could turn into tens of thousands of hungry caterpillars this spring.

Luckily, there’s still a bit of time to take advantage of this knowledge as the young caterpillars typically don’t become active until late April or early May. In the meantime, removal or destruction of the egg masses could help reduce local populations. While often found on trees, the egg masses can also be located on just about any surface in a yard—stacked boards, sides of structures, piles of firewood, and even on vehicles. Don’t delay if you noticed spongy moth activity in your area last year, since it won’t be long before the caterpillars are out and active this spring.

Reference: Forbush, E. H. and C.H. Fernald. 1896. The gypsy moth. Porthetria dispar A report of the work of destroying the insect in the commonwealth of Massachusetts, together with an account of its history and habits both in Massachusetts and Europe.  Boston, Wright & Potter. 495pp.