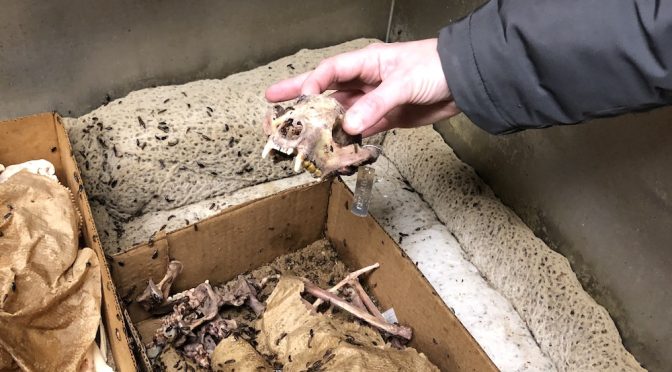 Unbeknownst to most students, employees, and visitors at UW-Madison, there’s a room of flesh-eating beetles on campus.  An unmarked door on Bascom Hill leads to the chamber more formerly known a the Dermestarium, which serves a rather peculiar yet specific purpose.  No need to worry though—this isn’t 1999’s The Mummy.  Rather, these insects are actually quite helpful in the way that they’re used.

Most insects are actually helpful in one way or another and provide ecosystem services as pollinators, predators, parasitoids, decomposers, or in other roles.  Humans have also figured out some pretty unique ways in which insects can help us out.  For example, mealworms can eat and break down certain types of plastics and are being looked at as a way to help reduce man-made waste materials.  In the legal realm, knowledge about insects is used to help solve crimes—a field known as forensic entomology, which dates back nearly 1,000 years.  In the case of UW-Madison and many other universities and museums, a specific type of beetle is used to help  clean skeletal remains for research, teaching, and display in zoological museums.

The beetles in the UW Dermestarium are known as hide beetles (Dermestes maculatus) and they’re especially fond of dried-out, protein-rich materials such as remnants of muscles, sinew, fur, feathers, and similar materials.  Out in nature, such insects do play a role in the natural break down of animals remains—but not right away.  Rather, much of that initial work is left to the larvae (maggots) of blow flies (Family Calliphoridae) and flesh flies (Family Sarcophagidae).  Hide beetles and close relatives from the “carpet beetle” group (Family Dermestidae) show up days, weeks, or even months later once the remains are drier.

In a museum setting, hide beetles can be helpful in the preparation of skeletal remains.  With their small size (roughly 1/4-inch long) , these insects use their mandibles to efficiently remove leftover bits of tissue from tiny nooks and crannies.  For a human trying to prepare remains, such a task would be tedious and may not be feasible for some structures (such as the inside of a skull).  However, a tank of these beetles can easily clean skeletal remains in a matter of days with relatively little effort required, other than maintaining correct ambient conditions for them.

Interestingly, hide beetles and close relatives like the larder beetle (Dermestes lardarius) can be found in our own homes as well.  Their presence poses little risk to humans, but could indicate the presence of a dead rodent or bird in a structure.  Such insects can also develop on a range of protein-rich materials ranging from dead insects in a window sill to human and pet foods and they can occasionally be a pest in home pantries.  Historically, such insects were notable pests of dried meats and cheeses in storage. If you’re curious to know more about these and other insects associated with our homes and everyday lives, Richard Jones has an excellent book on the topic: House Guests, House Pests: A Natural Hisotry of Animals of the Home.

A more detailed history of UW-Madison’s Dermestarium can be found here.