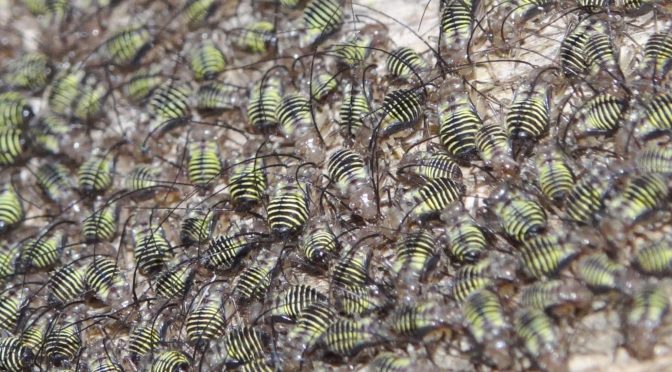 In the grand scheme of things, most insects (and spiders) are loners.  Perhaps they set a good example for us in 2020 with their social distancing.

Of course, insects have to find a mate to reproduce at some point in their lives*, but out of the 1 million+ described insect species, being truly “social” isn’t the norm.  There certainly are some well-known examples of insects that are eusocial—i.e., they live together as a colony.  Examples include ants, certain types of wasps (such as yellowjackets and paper wasps), some bees, termites, and a few other interesting examples.  However, there are many insects that are much more solitary in their habits.  If you think of our bees in the Great Lakes region, we have roughly 500 species.  Other than honey bees, bumble bees and a few others, the vast majority of these species are solitary creatures with each female doing her own thing.

Interestingly, there’s a quirky insect that can be commonly encountered this time of the year and it missed the memo on social distancing.  I’m referring to an interesting species of barklouse (Order Psocodea): Cerastipsocus venosus.  Barklice are relatives of true lice (e.g., head lice and pubic lice) but they’re really quite harmless to humans and tend to be scavengers.  Barklice make up an obscure group of insects and many entomology students simply identify them to “order” level as this group can be challenging to narrow down further to family, genus, or species.

If you haven’t encountered Cerastipsocus venosus (aka “tree cattle”) before, it might catch you off guard to find a group (formally known as a “herd”) of these small insects hanging out together on the bark of a tree or a rock in your yard.  The tiny juveniles are particularly striking with yellow stripes on their abdomens.  The adults are larger (up to 1/4″ long) and possess black wings.

Rest assured, these barklice pose no threat to trees or other plants in our yard and these native insects simply nibble on lichens, and pieces of dead tree bark.  Every year I get many reports of these insects in mid- and late- summer at the UW Insect Diagnostic Lab and there’s no need to spray or do anything about these if you spot them in your yard.  These barklice don’t seem to stay in the same place for very long, so perhaps their herds just move along looking for greener pastures.

*Some insects are able to reproduce asexually, and don’t technically have to find a mate…