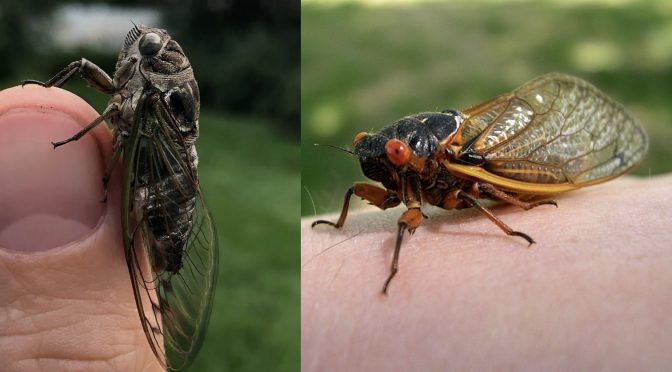 Perhaps you’ve heard some buzz about periodical cicadas (Magicicada spp.) lately. These insects resemble our typical “dog day” cicadas, which we see in mid-to-late summer in Wisconsin, but they are orange and black with vibrant reddish eyes instead of a dull greenish color. Parts of the US are currently seeing mass emergences of periodical cicadas, which appear by the millions every 13 or 17 years depending on the species. I’ve had a number of questions this last month asking if this was “the year” for us to see them in Wisconsin, but it’s not time for the big show…yet.

Periodical cicadas are sorted into cohorts known as “broods”, which occur in particular geographic areas and emerge at specific points in time. For the most part, these insects are excellent timekeepers and some broods have been documented as far back as the 1600’s in the eastern US. There are entire websites and apps dedicated to these insects and their schedules, and scientists have labelled broods with Roman numerals to help differentiate the cohorts.

With all the broods out there, some parts of the US do see these cohorts overlap in space, but these can be separated by the years in which they emerge.  In Wisconsin, the situation is fairly straightforward as we only see a single brood: Brood XIII. Brood XIII’s 17-year cicadas last emerged in 2007, meaning that we’ve got four more years to wait until their mass emergence in 2024.

Interestingly, I’ve received a number of photos and reports of periodical cicadas in Wisconsin over the last month or so. I’ve had several confirmed reports from the Lake Geneva area (Walworth County) a confirmed report from southeastern Dane County, and a suspected report from Sauk County.  While most periodical cicadas stick to the schedule, occasionally some of these insects veer off course. These out-of-sync individuals are referred to as “stragglers” and it turns out that Brood XIII has a history of these stragglers. In the late 1960’s, large numbers of stragglers were documented in the Chicago area. Likewise, many of the Chicago suburbs are seeing a similar phenomenon this year. With that said, we did technically see some periodical cicadas this year, but we’ll have to wait a few more years before the real “fireworks”.