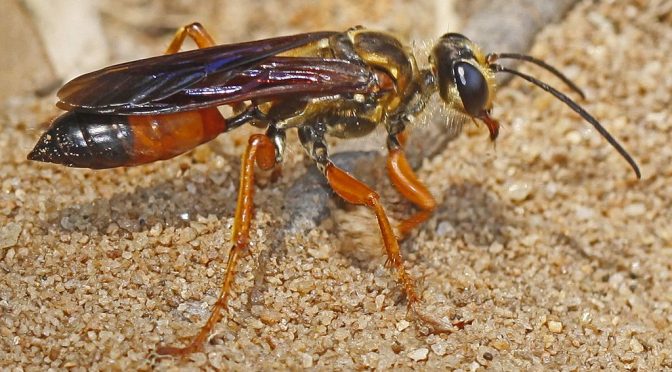 With the media craze about “murder hornets” this past spring, I’ve seen a definite increase in reports of Asian giant hornet look-alikes at the UW Insect Diagnostic Lab this summer.  Many folks recognize the commonest look-alike in the Midwest, the eastern cicada killer (Sphecius speciosus), which becomes active in July around the time that their prey (cicadas) start emerging.  Another look-alike is one that you might not have bumped into before—the great golden digger wasp (Sphex ichneumoneus).  Similar to Asian giant hornets, great golden digger wasps are large and nest in the ground, which are reasons why they may be mistaken for the former.

If you haven’t spotted one before, great golden digger wasps can be a bit intimidating in appearance as they can easily be over an inch long.  However, their anatomy and appearance are quite different compared to Asian giant hornets.  Great golden digger wasps are mostly black with a rusty-reddish color at the base of the gaster (“abdomen”).  Their legs are the same reddish color and the black thorax and head possess fine golden setae or “hairs” (hence “golden” in their name).  In contrast, Asian giant hornets have distinctive black and yellow stripes on their gaster and a vibrant yellowish-orange head.  Great golden digger wasps belong to the “thread-waisted” wasp family (Family Sphecidae) and have a long, slender petiole (“waist”).  This isn’t as thin and narrow as the “waist” of the related black and yellow mud dauber (Sceliphron caementarium), but still is quite noticeable when viewed from the side.

In terms of their biology, both Asian giant hornets and great golden digger wasps do nest in the ground, but the similarities end there.  The Asian giant hornet is really quite similar to our ground-nesting yellowjackets in terms of their nesting behavior.  These are social creatures which start nests from scratch in spring and build up in size over the course of the warmer months.  Colonies ultimately die out in fall except for the “new” queens which overwinter.  With a large colony of relatives to defend, social wasps can be defensive, especially when colonies are at peak size.

Because they’re unlikely to sting humans, controlling great golden digger wasps is rarely justified and these magnificent creatures can simply be admired.  Ultimately, these wasps are strongly associated with sandy soil, so if you see them in your yard every year and would prefer to not have them around, modifying the landscaping may be a long-term option to dissuade them from an area.

Author’s note: As of August 2020, Asian giant hornets have not been found in Wisconsin or anywhere in the Midwest.  In North America, these insects are only known from far northwestern Washington state and nearby parts of British Columbia.

See this earlier post for additional details on the Asian giant hornet.