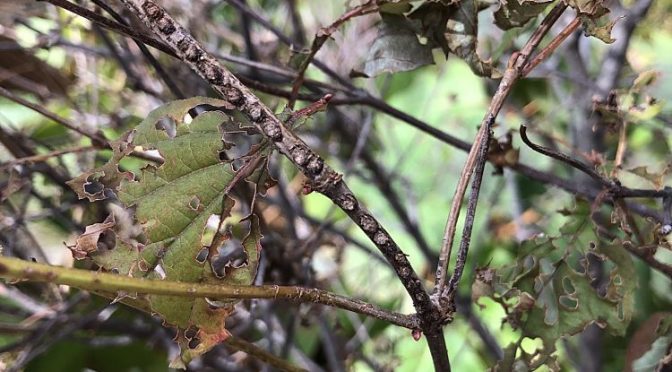 A perk of being an entomologist is being able to better understand the world through the tiny creatures around us.  However, this can also be a bit disheartening at times.  While vacationing in Florida several years ago, I remember visiting the beach and the first three arthropods I encountered were out of place—a honey bee (originally arrived with Europeans), a millipede from Caribbean islands, and a weevil from Sri Lanka.  I doubt any other beachcombers recognized the international gathering amongst the dunes that day.

Seeing the world this way really reinforces the notion that humans play a critical role in the movement of species around the planet.  Scientists can make their best predictions about invasive species, but there are plenty of surprises in terms of when and where a given species will turn up.  For high priority invasives, designated surveys and inspections are conducted by government agencies to help monitor the situation.  The general public can also play an important role in documenting the presence and distribution of invasive plants, insects, and other organisms.  In Wisconsin, for example, the Wisconsin First Detector Network (WIFDN) uses a network of citizen scientists and a smartphone app to document invasive species.

In some cases, invasive species are simply stumbled upon.  Back in July, I bumped into the first case of the purple carrot seed moth in Dane county while riding some local mountain bike trails.  Along these lines, my wife and I were walking our dogs in early November when I spotted some suspicious damage on a row of viburnum shrubs.  A closer look revealed the distinctive feeding holes and egg pits of the invasive viburnum leaf beetle—the first evidence of an established infestation in Dane County.

The first established case of the viburnum leaf beetle in Wisconsin occurred in 2014 in northern Milwaukee county and a more detailed account of this species can be found in the original post on this blog.  Unfortunately, this invasive beetle has made some dramatic jumps on the map over the last few years—likely due to human movement of infested plant materials.  Back in 2017, VLB was detected in Oshkosh (Winnebago Co.). In June of 2019 viburnum leaf beetle was spotted in Hurley (Iron Co.) in far northern Wisconsin and was detected across the border in Ironwood, Michigan shortly thereafter. Other detections in 2019, include Racine and Walworth counties.

The viburnum leaf beetle can cause significant damage to viburnum shrubs and is already wreaking havoc in the greater Milwaukee area.  Viburnums, including American cranberrybush viburnum, arrowwood viburnum, and others are widely distributed in both urban and natural settings, meaning that Wisconsinites now need to keep an eye out for this damaging insect in new parts of the state.

To learn more about the appearance, damage, and biology of the viburnum leaf beetle, visit the original post and this factsheet.