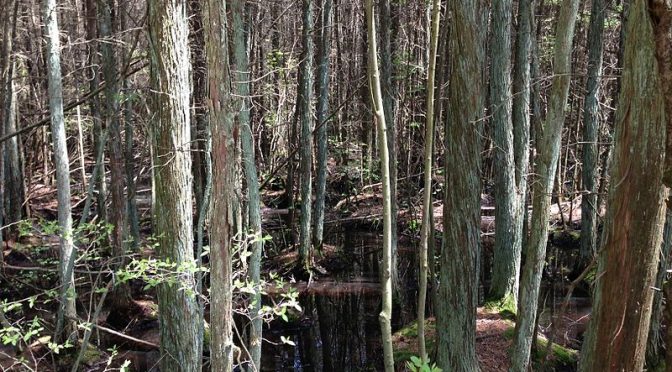 1. Eastern Equine Encephalitis is a mosquito-borne disease. But one species in particular, Culiseta melanura, plays a critical role.  Culiseta melanura is widely distributed across the eastern US, but is specifically associated with freshwater swamps with standing trees.  The larvae of this mosquito tend to develop in small, protected, naturally occurring cavities (“crypts”) amongst the roots of trees such as maple, hemlock, and cedar.  Interestingly, Culiseta melanura, does not like to bite humans and almost exclusively takes blood meals from birds.  However, as EEE builds up in local bird populations, other mosquito species with more flexible feeding habits can act as a “bridge” and allow the disease to move from birds to mammals with subsequent blood meals.  A dozen or more mosquito species from the genera Aedes, Coquillettidia, Culex, and Ochlerotatus have been implicated in vectoring the disease from birds to humans.

However, in severe cases of EEE, inflammation of the brain can lead to symptoms including fever, headache, vomiting, confusion, convulsions, and coma.  Roughly a third of such human cases are fatal and survivors often suffer from permanent neurological complications.  Individuals younger than 15 or older than 50 are at greatest risk, as well as individuals that live, work, or recreate near swampy areas. In the US, cases of EEE tend to occur in states along the Atlantic coast and the Gulf coast.  The New England states of Connecticut, Massachusetts, and Rhode Island have seen nearly 20 human EEE cases this year.  Cases can also occur in the Midwest, with a cluster of nearly a dozen reports in southwestern Michigan and northern Indiana in 2019.

3. Humans aren’t the only species impacted by Eastern Equine Encephalitis.  In fact, EEE is primarily a bird disease.  For example, many passerine birds (a group that includes our common songbirds such as robins and starlings) can readily become infected with the EEE virus. Some states even use “sentinel” birds to monitor EEE activity.  If the conditions are right in a given year, populations of the ornithophilic mosquito Culiseta melanura can cause EEE to build up in a local bird population.  Eventually, other mosquito species allow the disease to jump from birds to humans.  Horses can also become infected with the EEE virus and because equine infections typically precede human cases by a few weeks, an uptick in horse cases can serve as a general indicator of potential risk to humans in an area.  There is a vaccine available for horses to help protect them from EEE.

4. Eastern Equine Encephalitis is very rare in humans.  Case numbers vary around the eastern US every year, but over the last decade the country has averaged only seven human EEE cases per year.  In Wisconsin, there have only been three documented human cases of EEE between 1964 and 2018.  The limited habitat of the key mosquito species and its restricted feeding behaviours help explain the rarity of human cases.  Despite news reports within the last month, the EEE threat should nearly be done for the year in the Upper Midwest.  Eastern Equine Encephalitis cases typically peak in late summer or early autumn, and with temperatures dipping in the region (and snow in the forecast), mosquito activity is on the decline in our area.

5. General mosquito precautions are one of the simplest ways to protect against Eastern Equine Encephalitis.  Because the key mosquito species involved with EEE (Culiseta melanura) is associated with freshwater swamps, chemical insecticide treatments to such areas are often not an option for individual land owners and can pose environmental concerns.  Instead, practices such as wearing long-sleeved clothing, using EPA-registered repellents (such as DEET and picaridin), avoiding areas and periods of high mosquito activity, and removing standing water on a property are some of the best precautions to take.