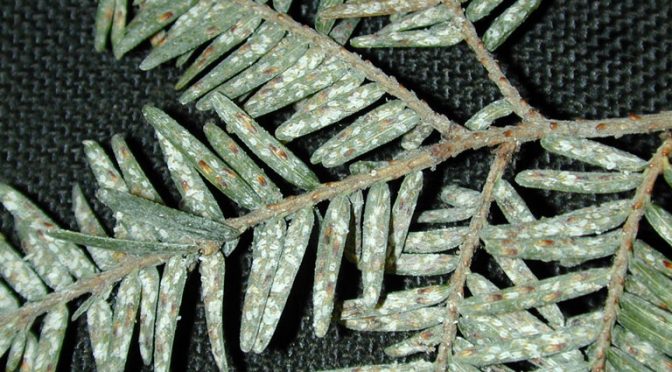 Christmas has come and gone in 2019, but an uninvited Grinch may still be lurking to steal the holiday spirit. The Grinch in this case isn’t the green gremlinesque being of Dr. Suess, but a tiny invasive insect known as the elongate hemlock scale (EHS). The elongate hemlock scale (Fiorinia externa) is native to Japan and was first detected in the US in Queens, New York over a century ago. Since that time, EHS has spread to 15 states in the eastern US.

Elongate hemlock scale attacks over 40 species of conifers—especially hemlocks which can be common throughout the Appalachian Mountains, and Fraser firs and balsam firs, which are commonly grown as Christmas trees. Certain types of spruces and pines can also be attacked. Established populations of elongate hemlock scale are not known from Wisconsin, but a recent detection of this pest in the state raises concerns for Christmas tree growers, the plant nursery industry, tree care professionals, and homeowners with conifer trees in their yards. Forested areas are also at risk, meaning the stakes are potentially high with this insect.

While insect activity is quiet in the Midwest this time of the year, we’re hearing about the elongate hemlock scale now due to its Christmas connection. Similar to 2018, the Wisconsin Department of Agriculture, Trade and Consumer Protection recently found that fir Christmas trees, wreaths, and other holiday decorations infested with EHS had been shipped to Wisconsin from North Carolina. The picturesque Blue Ridge Mountains of western North Carolina provide ideal habitat for Fraser firs—one of the most popular species of Christmas trees. North Carolina grows approximately a quarter of all the Christmas trees sold in the US each year and with elongate hemlock scale established in that state, it increases the risk of movement of this invasive insect around the country.

Elongate hemlock scales look unusual as far as insects go. These insects have traded mobility for defense—they hunker down on plants and produce a waxy coating which helps protect them from predators and parasites. As a result, elongate hemlock scales aren’t easily recognizable as insects since the usual signs of segmentation—body regions, legs, antennae—are not readily visible. Instead, these insects have a vague, oblong appearance. Adult females are small (just under 1/10th of an inch long) and are covered with a waxy brownish coating. They are typically found on the undersides of needles. Males are slightly smaller and develop beneath pale whitish coverings. Mature males do emerge with wings but are weak fliers and travel short distances to mate with the wingless, immobile females.

Under their protective coatings, these insects use needle-like mouthparts to suck fluids from plants. With their small size, damage occurs when large numbers of individuals infest plants. Their waxy coverings also limit the effectiveness of insecticides, making EHS a challenging pest to control if they become established.

Because elongate hemlock scale has been detected in Wisconsin this year in Christmas trees and other holiday decorations, a key objective at this point is to prevent this insect from getting a foothold in the state. By all means, continue to enjoy your holiday decorations, but when you’re ready to remove these materials, take the following steps to help prevent this insect from becoming established in Wisconsin:

1) If your Christmas tree or natural wreaths, garlands, or other decorations are from a local Christmas tree farm or elsewhere in Wisconsin, no special precautions are needed for elongate hemlock scale. Because EHS is not established in the state, these materials can be removed as usual at the end of the holiday season.

2) If your Christmas tree or natural wreaths, garlands, or other decorations are from a big box store, grocery store, or similar vendor, or if you are not sure of the origins of these materials, it is advised to check these materials for signs of elongate hemlock scale (i.e., brown spots on the undersides of needles). The Wisconsin Department of Agriculture, Trade, and Consumer Protection is advising that infested or suspect materials preferably be burned (check with the DNR for any burning restrictions in your area). Alternatively, such materials could be bagged and discarded as waste. Infested or suspect materials should not be composted or used for wildlife habitat in your yard.

For additional information on elongate hemlock scale, visit the WI-DATCP EHS page and the recent press release about the 2019 EHS detection. 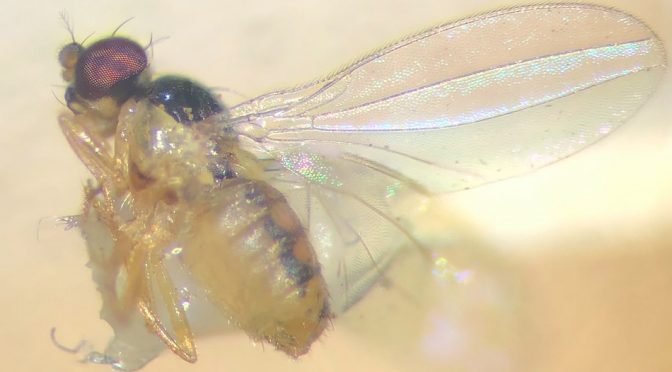 Imagine taking an American history class where many of the important events were reduced to mere footnotes or skimmed over entirely.  Anyone taking the class would be shocked at this notion—I mean, the Civil War was a big deal after all!  When you look at a different field of study—biology—such a trend has surprisingly occurred, with insects getting the short end of the stick.  Insects are the most diverse and abundant animals on the planet and make up roughly 70% of the 1,000,000+ described animal species.  Yet, many introductory biology textbooks skim over insects (and invertebrates in general) in favor of more charismatic megafauna—a trend that has only gotten worse over time.  Insects may be small, but they serve crucial roles in the world around us from pollinating plants to serving as the base of food webs.  Appropriately, E.O. Wilson referred to insects as “the little things that run the world” in his famous call for their conservation.  It’s difficult to conserve these little creatures that run the world when so few people really get to know them.

With their sheer diversity and abundance,  knowing the insects also helps us better understand the world, and everyday life, around us.  Getting to know the many different insects is a bit like learning a foreign language.  Travel to an exotic country where you don’t speak the local tongue and you’d have a hard time understanding the everyday happenings around you.  As you picked up words and phrases of that foreign language, things will become easier to understand.  Along these lines, if you can recognize the insects around you, it helps interpret the stories they tell.  Truly knowing your insects is like possessing an all-powerful decoder ring to the untold stories that surround us.

Let’s look to flies to illustrate this point.  To many folks, a small fly found in their home is assumed to be a fruit fly, and a large fly, a house fly.  But there are dozens of different flies that commonly show up indoors—each with their own story to tell.  Fungus gnats hint at overwatered houseplants, moth flies indicate build-up in a bathtub drain, and metallic blow flies can alert you to a mouse trap in need of checking.  Outdoors, other species of flies can provide clues that gauge water quality, indicate the presence of specific plants, or solve crimes—but only if one knows how to interpret their clues.  If a picture is worth a thousand words, I’d argue that a properly identified insect is worth even more.

This holiday season, my own love of insects led to a scientific discovery that would have gone unrecognized in most households.  A day after setting up our “real” Christmas tree, I noticed several tiny flies at the windows of our home.  My curiosity was piqued and like any good detective, some sleuthing was needed.  I recall an undergraduate professor telling the class, “a biologist without a notebook is off duty” to which I’d add, “an entomologist without vials is off duty”.  So now I was off, vials in hand, on an insect hunt in my own house.  Once the specimens were examined under the microscope, I recognized the flies as a rare species (Asteia baeta) from the poorly-known family Asteiidae.  There isn’t much written about these flies, but they’re known to be associated with fungi, vegetation, and tree sap, which told me that the new Christmas tree was the source.  These flies have only been spotted in Wisconsin a few times and no preserved specimens exist for that family in the Wisconsin Insect Research Collection (I’ll be donating some soon).  Looks like our Christmas tree came with it’s own entomological story to tell this year—I’m glad I knew how to listen.

Since last week’s press release on the Brown Marmorated Stink Bug by the Wisconsin Department of Agriculture, Trade and Consumer Protection (DATCP) and my own blog post on this invasive pest, I’ve been getting many reports of this insect from Wisconsin residents.  It’s always great to get reports from the community as it helps us keep track of this invasive pest.

Interestingly, there have also been many cases of an insect that somewhat resembles BMSB: the Western Conifer Seed Bug.  Both insects try sneaking into buildings to look for shelter and possess “checkerboard” patterns at the back of the body.  However, when you have the insects side by side, they can be easily separated.  The western conifer seed bug is longer and more slender in appearance, has dull reddish and orange patches on the body, and has distinctly dilated hind legs (think “bell-bottoms”).  In addition, these insects possess a unique zig-zag (“lightning bolt”) pattern on each wing, which can easily be seen with the naked eye as illustrated in the ID guide below.

While the western conifer seed bug  can sneak into buildings in the fall, they tend to invade in relatively low numbers.  This species feeds on the seed cones of pines and other conifers, but doesn’t seem to cause much (if any) harm to the trees.  Overall, they can be a bit of a nuisance, but that’s about it, unlike BMSB, which can potentially damage many different types of plants.

Have western conifer seed bugs around the house and want to know more about their biology and management?  Check out this handy factsheet from UW-Extension.