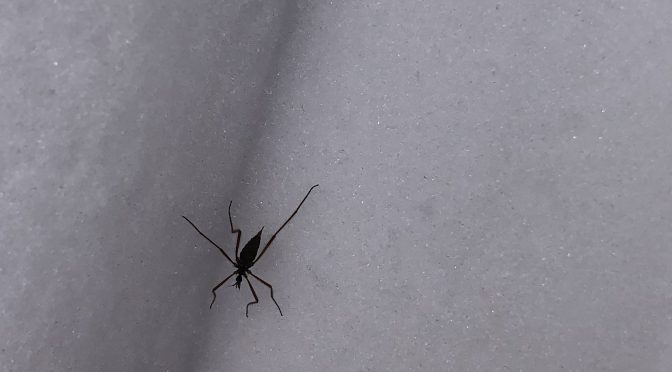 Despite the season, there’s a surprising number of insects and related arthropods that can be found on the snow during the winter months here in the Midwest.  Such creatures have fascinating life histories and special adaptations (such as natural “antifreeze”or cryoprotectants) that allow them to not only survive, but remain active at low temperatures.  Even these adaptations have limitations and winter insects generally aren’t active if temperatures are below ~20˚F (-7˚C).  Most activity occurs on mild winter days when temps close to or just above freezing.

If you’re curious to learn more about the stories behind these winter creatures and others, I’d encourage you to check out Bernd Heinrich’s Winter World: The Ingenuity of Animal Survival. Read on to learn about some of our commonest “winter” insects in Wisconsin and nearby states:

Snow Fleas: If you follow this blog, you might recall the example of snow fleas from two winters ago.  These dark-colored springtails (Collembola) can sometimes be abundant enough to give large swaths of snow a sooty appearance.  Snow fleas can be common on mild winter days and if I’m out cross-country skiing in the Northwoods, I’m often more surprised if I don’t spot any.

Snow Flies: One of the weirdest examples of a “winter” insect would be “snow flies” from the genus Chionea.  Despite their spider-like appearance, snow flies are actually a type of wingless Limoniid crane fly.  Being wingless and generally slow moving might sound like an easy target for predators, but by being active at cold temperatures these insects can actually avoid the many predators that feed upon related flies during the warmer months.  Interestingly, their physiology is so specialized, that these unusual insects can be active between about 20˚F (-7˚C) and 32˚F (0˚C), but if it’s a warm winter day with melting snow it can actually be too hot for them!  If you’d like a more detailed look at these insects, check out J.R. Schock’s article in The Kansas School Naturalist.

Winter Crane Flies: I occasionally get reports of “swarming mosquitoes” on winter days, and perhaps you’ve bumped into a cloud of tiny delicate flies out in the snowy woods or on a mild fall or spring day.  What you’ve likely encountered are winter crane flies (Family Trichoceridae).  These delicate flies are related to mosquitoes but have no interest in blood.  The adults are simply trying to mate and the larvae are scavengers.

Snow Scorpionflies: In my mind, one of the more elusive winter insects is the snow scorpionfly.  Despite having “scorpion” in the name, these aren’t scorpions (or true flies for that matter).  Rather, they belong to a small order of insects (Mecoptera), which includes some bizarre examples, such as the common scorpionflies, hangingflies, and earwigflies.  Like the snow flies, the snow scorpionflies are also flightless and simply wander about on the snow when conditions are right.  In the Midwest, we only have two species from this group Boreus brumalis and Boreus nivoriundus, and both species are associated with mosses.

Aquatic insects: If you’re near open streams or rivers during the winter months, certain aquatic insects can sometimes emerge and be found on the snow.  Caddisflies and stoneflies are two of the commonest examples.  I recall ice climbing one winter’s night at Governor Dodge State Park west of Madison and reaching the top of a frozen waterfall only to spot dozens of adult “aquatic” insects active on the snow.  The conditions must have been just right that evening, as I also saw hundreds of tiny Cynipid wasps (from oak galls) on the snow as I descended the access trail from the climb.

Spiders: Hexapods aren’t the only arthropods getting in on the winter fun.  Species from at least a half-dozen families of spiders can occasionally be spotted on the snow on mild winter days.  They might be pretty lethargic, but it’s still interesting to see creatures like that out-and-about on the snow.  The video clip below shows a spider I spotted on the snow in Northern Wisconsin on New Year’s Eve a few years ago when the air temperature was right around 30˚F (-1˚C).