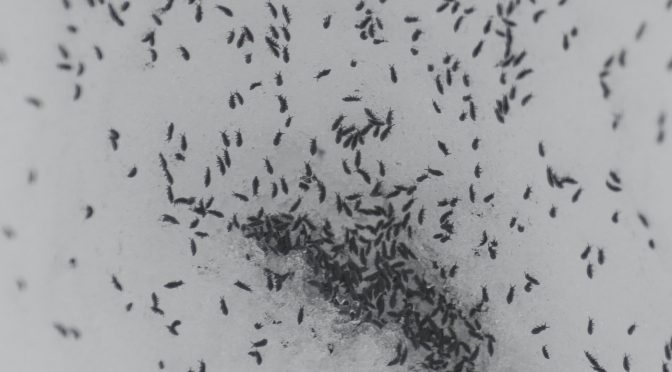 Fleas (Order Siphonaptera) can be an unwanted surprise—no one wants fleas on their pets or in their house.  Our commonest flea on both cats and dogs in the Midwest is the “cat flea” (Ctenocephalides felis), and this same species can also live on a wide range of wild animals.  Cat fleas may be annoying but can be controlled with a diligent multi-pronged approach: chatting with your veterinarian to pick a proper treatment for your pet and regular and thorough vacuuming. In heavy infestations, carpets and furniture may also need to be treated.  While fleas could be encountered anytime of the year, I see the vast majority of flea cases at the UW Insect Diagnostic Lab in late spring and summer.  In contrast, cases of fleas are few and far between during the winter months due to the dry conditions and lower temperatures which can be hard on these insects.

There is one type of “flea”, however, that I see regularly through the winter months—the “snow flea”.  Snow fleas (Hypogastrura nivicola   and close relatives) aren’t actual fleas and rather than a pest, these harmless creatures are a beneficial curiosity.  Their cold tolerance and ability to launch themselves into the air account for their nickname.

The snow fleas we’re talking about technically aren’t even insects and belong to a closely related group of arthropods known as springtails (Collembola).  Springtails get their name from the furcula—an anatomical structure on the underside of their bodies, which springs downwards to catapult them up into the air.  Springtails can’t “jump” very far by human standards given their tiny size (less than a tenth of an inch long), yet they can easily launch themselves many times their own body length in a mere blink of an eye (video).

The snow flea is unusual for springtails (and most arthropods) in the fact that these creatures can remain quite active during the winter months.  As discussed in this post from last March, insects and other arthropods have a variety of strategies to make it through winter, ranging from migration to freezing solid in some cases.  The vast majority of arthropods are inactive during winter, but some, like the snow flea, seem perfectly content wandering out on the snow.  With their tiny size and dark grayish bodies, snow fleas can almost look as if someone had dumped out a pepper shaker on the snow.

Their ability to remain active at frigid temperatures is due to the concentration of specific proteins in their bodies, which serve as a cryoprotectant or natural “antifreeze”.  During the rest of the year, these creatures simply blend in amongst fallen leaves where they scavenge upon decaying materials and help with nutrient recycling.

These creatures are truly a winter curiosity if you haven’t encountered them before.  The next time you’re out snowshoeing or cross-country skiing, keep an eye out for these tiny acrobats on the snow.

Final Note: Overseas, our friends in the UK have different creatures they refer to as snowfleas—insects from the genus Boreus, which we’d call “snow scorpionflies” in our area.