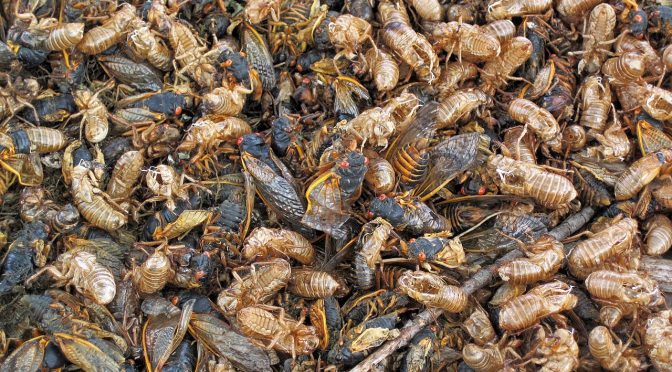 Will we see Brood X cicadas in Wisconsin or the upper Midwest this year? Read on to find out: Cicadas—they’re all over the news and soon to be out by the billions. All this buzz is about periodical cicadas, a group of species from the genus Magicicada which emerge once every 17 years (or every 13 years in some cases). Periodical cicadas are only found in the eastern United States and vary by location and the timing of their activity. To help categorize these insects, entomologists refer to each cohort of cicadas as a “brood” and have numbered them with Roman numerals. This year’s cicadas are referred to as Brood X (i.e., Brood ten) and last emerged in 2004.

Periodical cicadas are amongst the longest lived insects and their long life span and massive emergences are believed to be a survival strategy—by overwhelming predators with sheer numbers, they simply can’t all be eaten. But the wait for their appearance is a long one.  Periodical cicadas spend 17 years below ground as juveniles (nymphs) feeding on the sap from tree roots, before making their way above ground. Their emergence is associated with soil temperatures, and when the soil has warmed to 64˚F, they emerge. This corresponds to parts of April, May, or June depending on the location on the map. Once they make their way above ground, the cicadas molt and transform into adults.  Shortly thereafter, a raucous mating free-for-all commences. After mating, the females cut small slits into twigs of trees to deposit their eggs. The eggs hatch and the juveniles head to the soil for their lengthy development. Periodical cicadas don’t live long as adults (a matter of weeks), so it’s a long build up to a noisy grand finale.

With all the attention in the news, many Wisconsinites and other Midwesterners are wondering if they’ll be able to see or hear Brood X cicadas in their area this year. For Wisconsin, Minnesota, Iowa, and most of Michigan and Illinois the answer is no—although they aren’t terribly far away either. Brood X cicadas can be found in over a dozen eastern states, but primarily emerge in three main pockets:

While we won’t see Brood X cicadas here in Wisconsin, we will see other periodical cicadas in the not so distant future. Wisconsin is home to Brood XIII cicadas, which last emerged in 2007, meaning that the next big emergence in the Badger State is only a few years off in 2024. In the meantime, we’ll still see and hear plenty of our typical “dog day” cicadas during the warm days of summer.  To learn more about Brood XIII cicadas in Wisconsin, check out this post from last year.