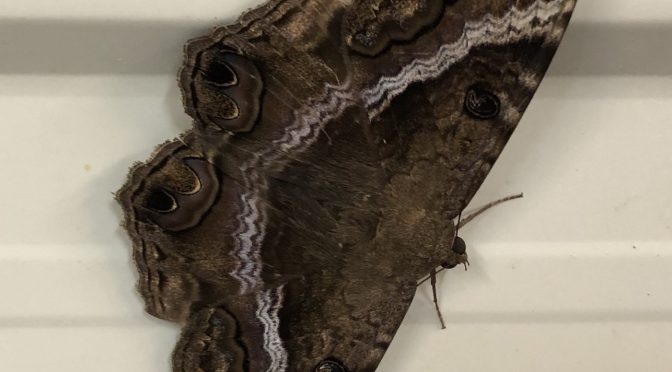 The largest moths you’ll likely encounter in the northern United States are the giant silk moths (Family Saturniidae).  We have a handful of species in the Upper Midwest which can be encountered with some regularity during the summer months: cecropia moths, polyphemus moths, luna moths, promethea moths, and imperial moths.  True to their name, the giant silk moths don’t skimp on size—they generally have wingspans in the range of 3 – 6 inches, depending on the species.  These moths are native to our area and the impressively large caterpillars feed on the leaves of various hardwood trees.

Finding an adult giant silk moth or one of the caterpillars is always a special occasion.  However, there’s an even more impressive large moth, which occasionally pops up in our area—the Black Witch (Ascalapha odorata).  The black witch has a wingspan of around 6 inches and can often be mistaken for a bat due to its dark colour.  This tropical species doesn’t natively occur in our area and originates in parts of South America and Central America.  However, the adult moths are somewhat regular “strays” and find their way as far north as parts of Canada.  Still, black witches aren’t common in Wisconsin (or the US in general), and I typically only hear of a few reports in the state each year.

Wind plays an important role in the movement of black witches from their native habitat.  One report even documented an adult black witch traveling with a strong westerly wind to an island in the south Atlantic—a distance of over 2,000 miles from South America.  In the upper Midwest, dips in the jet stream and storm systems can play an important role.  Since starting at the UW Insect Diagnostic Lab in 2014, I’ve seen several cases where black witches are spotted in late summer after hurricanes have hit the Gulf Coast states.  Along these lines, hundreds of black witch moths arrived in Texas as Hurricane Claudette passed through in 2003.  Following such an intense journey, the moths are often damaged, with tattered wings or other injuries.  Surprisingly, some moths seem to arrive in nearly pristine condition, like this beautiful specimen spotted in Door County last month shortly after hurricane Sally made landfall.

If you do ever spot a black witch, consider yourself lucky.  If you’re extremely lucky, you might even spot one of the rarest moths that strays to the Midwest—the “owl moth” (Thysania zenobia)—another large moth which has only ever been spotted in Wisconsin a few times and is much rarer than the elusive black witch.