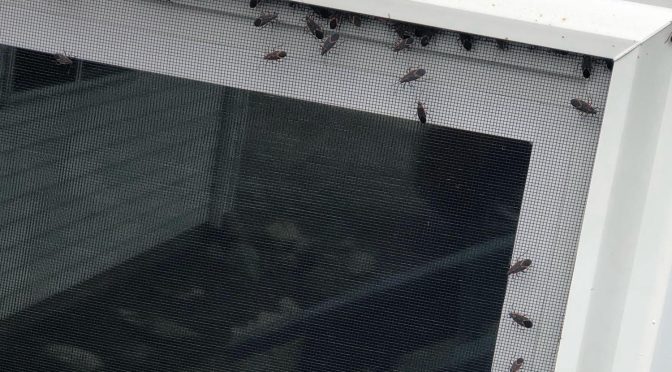 If you’re like me, you’ve probably been out appreciating our recent fall weather.  Likewise, boxelder bugs (Boisea trivitatta) have also been enjoying the warmth.  I’ve seen an uptick in reports of boxelder bugs at the UW Insect Diagnostic Lab this year compared to most other years in the last decade and weather patterns in the Midwest have played an important role.

Whether you recognize them or not, there’s a good chance you’ve bumped into boxelder bugs before.  These black and red insects can be common throughout the warmer months and can be especially abundant in late summer and early fall.  Adults are approximately ½ inch long and have a criss-cross pattern on their backside created by their wings.  Juveniles (nymphs) are smaller with much more red on their bodies.  As the nymphs mature, their developing black wing pads become noticeable.  True to their name, boxelder bugs are commonly associated with boxelder trees (Acer negundo).  Botanically speaking, boxelders are technically a type of maple, and some other maples can also be a host for these insects as well as ash trees and a few others.

From a plant-health perspective, boxelder bugs cause little damage to plants and are of little concern.  These insects get the most attention when they’re spotted on the sides of homes and other structures.  They’re often particularly fond of the southern and western sides of homes where the warm afternoon sun hits.  Boxelder bugs are often spotted on buildings in fall as they search for sheltered overwintering spots.  If they can squeeze in through a gap or crack, they can easily hunker down in a wall void, or similar spot for the winter.  Sometimes, boxelder bugs can make it to a location where they become active indoors during the winter months, much to the chagrin of the humans living in the home.  While these insects can be perceived as a nuisance, they’re really quite harmless to people, pets, and homes (although they could stain light-colored fabrics if crushed).  Like other “fall invading” insects (e.g., cluster flies, multicolored Asian lady beetles, brown marmorated stink bugs, and western conifer seed bugs), a helpful approach is to seal up potential entry points on the exterior of your home before these insects make their way inside.

Looking at long-term patterns, boxelder bug populations have generally been low in many parts of Wisconsin over the last decade.  A reason for this is moisture.  When we have rainy years, entomopathogens (insect-infecting pathogens) can keep boxelder bug populations low.  In contrast, boxelder bugs tend to thrive under drier and warmer conditions.  There’s even been research on a closely-related species (the western boxelder bug, Boisea rubrolineata) in the western US suggesting that those insects deliberately sunbathe and secrete a chemical to help inhibit the common entomopathogenic fungus Beauveria bassiana.  Here in Wisconsin 2021 was surprisingly dry in many areas which likely helped boost boxelder bug numbers.  Likewise, some parts of Wisconsin also saw dry conditions continue into 2022, which may have helped them further, leading to an increase in boxelder bug populations and reports this year.