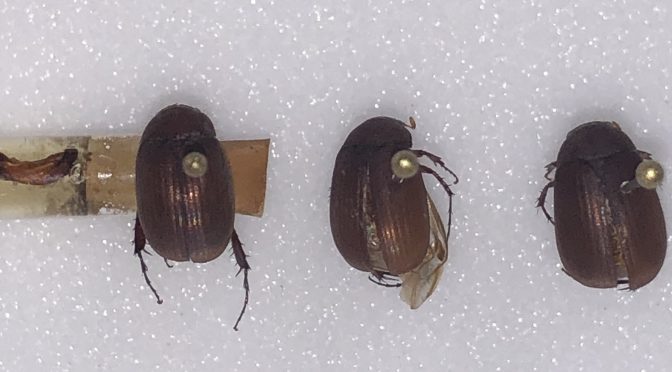 Serendipity can play a big role in being an entomologist or any kind of naturalist. Sometimes, you’re simply in the right spot at the right time to make an interesting observation or scientific discovery. There’s lots to learn about the natural world around us and plenty of room for discoveries.

Think about birds for a moment. According to the Wisconsin Society for Ornithology, there are 441 species of birds known from the state. Birders can spend an entire lifetime learning about the biology and habits of these species and how to identify them by sight, song, and other features. Now, think about insects. Here in Wisconsin, our best estimate is that we have somewhere in the ballpark of 20,000 insect species in the state (let alone all the other arthropods!). During talks to the public, I often joke that birders have it easy—with so many insects out there, you could have ten lifetimes and still have plenty to learn and discover!

With that said, there’s lots to be discovered in the world of insects. Even though I’ve been collecting and studying these creatures for over 15 years, I still make discoveries on a regular basis. This often requires hours of diligent observations and the ability to focus on the tiniest of details, but in other cases it comes down to plain old luck. For example, I’ve written about discovering and collecting specimens of the rare fly, Asteia baeta, in my house after setting up a Christmas tree (no such luck this year…).

A more recent example of entomological serendipity occurred this last July in my own backyard in Dane County. I was enjoying a cold beer on our back deck one warm evening  when I noticed a few small scarab beetles on our window screens. Since I keep a lookout for invasive species as part of my job at the UW Insect Diagnostic Lab, I always have a list of species in mind that I’m keeping an eye out for. In this particular case, the beetles piqued my interest due to their resemblance to the non-native Asiatic garden beetle (Maladera formosae), although we have native species in the genus Serica that can look similar to the naked eye. Just a few weeks before this, I had identified some specimens of the Asiatic garden beetle from a suburb of Chicago, which placed the species on my immediate radar.

Hold my beer, I’m getting some vials. I collected all the specimens I could spot (4), and was able to confirm their identity as the Asiatic garden beetle after tracking down appropriate keys and dissecting out the male genitalia—a surprisingly common and delicate entomological task used to distinguish certain insects that look similar. While I’ve seen a possible report of the AGB on iNaturalist, the specimens from my back deck marked the first specimens of the Asiatic garden beetle collected and confirmed from the state of Wisconsin.

The Asiatic garden beetle first showed up in the United States in New Jersey in the early 1900’s and has spread westward ever since. This species is a notable pest and feeds on a wide range of plants. The adult beetles are “sneaky”—hiding by day and causing most of their damage after dark. They are primarily active on warm evenings (>70˚F) and can be strongly attracted to lights. In this case, not only was I enjoying a cold beer on a warm summer night, but the string of patio lights over our deck likely attracted the beetles from the nearby area. The larvae (white grubs) can be pests of turfgrass, home gardens, and agricultural crops such as corn and potatoes.

At this point, I have many more questions than answers about the Asiatic garden beetle and what the future holds for this species in Wisconsin. To date, only a handful of specimens have been collected (four in July and another specimen in mid-September) and no plant damage has been observed. However, I’ll be keeping a close eye on this species, since reports from nearby states suggest that we may be seeing more of this species and damage in the coming years.