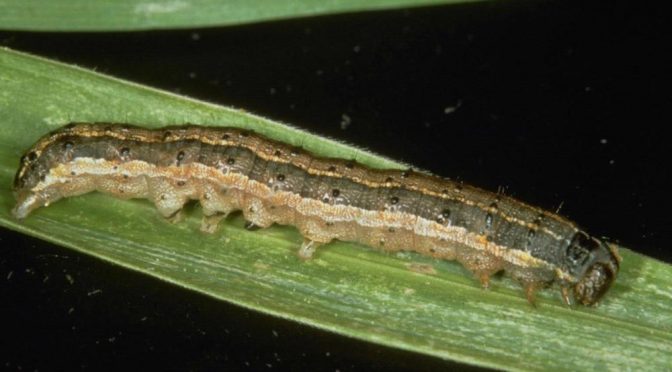 It’s been hard to miss the recent news headlines about fall armyworms “FAW” (Spodoptera frugiperda). States east of the Rockies have seen historical outbreaks of this insect in 2021, including a bit of fall armyworm activity here in Wisconsin. In some cases, the caterpillars have decimated entire crop fields or home lawns overnight before marching onwards in search of “greener pastures”.

We usually don’t see much of the fall armyworm in Wisconsin and it’s primarily a pest of warmer areas, such as the gulf coast states.  The FAW is native to tropical and subtropical parts of the western hemisphere and the larvae (caterpillars) can feed on dozens of different types of plants—ranging from field crops to fruits and vegetables and even turfgrass. They can be particularly important pests to crops such as corn, grains, and alfalfa.

The fall armyworm can’t survive the winters in the US, other than the southernmost areas (e.g., southern Texas and Florida). However, in spring and summer the adult moths migrate northwards and lay eggs. Over the course of many generations and subsequent northward migration, fall armyworms can make it to the upper Midwest and even parts of southern Canada. Historically, fall armyworm has rarely been a notable pest in Wisconsin or the upper Midwest—it simply arrives too late or in too small of numbers to be a concern. To a certain extent, every year is a roll of the dice, but the odds are usually in our favor in Wisconsin and other northern states.

This year has been different though, with large numbers being spotted northwards and reports of significant damage coming in from nearby states such as Illinois, Indiana, Iowa, and Ohio. Many other states ranging from Kansas to the mid-Atlantic region have also been impacted in the later parts of summer. While there have been scattered reports of fall armyworm damage to field crops in southern parts of Wisconsin, the lateness of this pest’s arrival and our declining temperatures have likely spared us from the widespread damage seen in other states.

Under hot conditions (e.g. temps in the 90’s), the life cycle of the fall armyworm—from eggs to adult moths—can take only a few weeks. However, fall armyworms are “cold blooded” creatures and cooler temperatures slow down their growth and development. Depending on how chilly it is, their life cycle can be “stretched out” to take 60 days or longer—leaving them much more vulnerable to predation, parasitism, or exposure to frosts.

One study* found that fall armyworm eggs didn’t hatch at all if temperatures were cool enough (though not particularly chilly by Wisconsin standards). That particular study simulated daytime/nighttime temperatures of 21˚C (70˚F) and 8˚C (46˚F)—temperatures that are “in the ballpark” for many parts of Wisconsin by mid-September and are often considered downright “pleasant” by Wisconsinites.  Eggs held at warmer temperatures in the experiment hatched just fine.

For eggs that did hatch this year in Wisconsin, cool temperatures also could have helped us out by slowing down their development. As they grow, fall armyworms pass through six sub-stages (instars). The early instar caterpillars are so small, they simply can’t eat much and cause little damage. It’s not until FAW caterpillars become more mature fifth and sixth instars that they really start to chow down and cause significant damage to plants. Thus, falling temps could help prevent the fall armyworm caterpillars from making it to the destructive late instar stages and could also leave them more exposed to a variety of threats.

The fall armyworm outbreak of 2021 could very well be a “once every few decades” type of event, and our northern location likely helped us avoid the significant problems seen in other states. However, if changing climate gives the fall armyworm a “head start” by overwintering farther north, it’s possible that we could see more of this pest in Wisconsin in the future.

*Barfield, Mitchell, and Poe. 1987. A Temperature-Dependent Model for Fall Armyworm Development.  Annals of the Entomological Society of America. 71(1): 70-74.