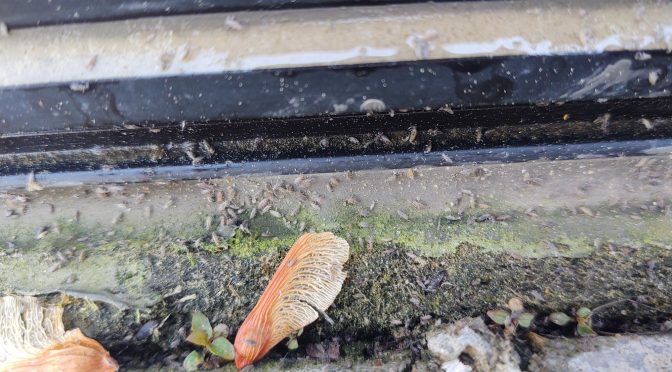 With the unusually dry weather we’ve had in Wisconsin this year, I would not have predicted that springtails (Collembola), would have been one of the commonest samples at the UW Insect Diagnostic Lab this summer. In general, springtails tend to thrive under damp conditions. These tiny (<1/10 inch long), insect-like creatures are commonly associated with leaf litter, rich soil, compost, and mulch or plant beds outdoors where they feed on fungi and decaying plant materials.

Springtails are ubiquitous and can be found around the globe under a wide variety of conditions. In many parts of North America, you can even bump into large numbers of dark-colored springtails (snow fleas) bouncing around on the snow in winter.  Springtails are a fairly diverse group with over 15 Families in North America, so there’s a lot of variability in terms of the color and overall appearance.

Indoors, it’s usually too dry for springtails to survive or reproduce unless damp conditions exist. Occasionally, they can be found indoors in association with overwatered houseplants, new construction (due to residual moisture in construction materials), plumbing leaks, and other moisture issues. In many cases, when springtails are spotted indoors, they originated outside and simply snuck in but perish shortly thereafter due to desiccation.

With the lack of precipitation and this year, I haven’t gotten the impression that springtails are necessarily thriving outdoors. However, the hot and dry conditions are likely forcing springtails to sneak into structures or other spots that may be slightly damper, darker, and cooler. When they do make it inside, springtails are often spotted near moisture sources—kitchen or bathroom sinks, showers or bathtub drains, and basement floor drains. Some good news is that springtails are completely harmless to humans, pets and homes, and in most cases won’t survive long.

The following tips can be helpful when springtails are a problem indoors: