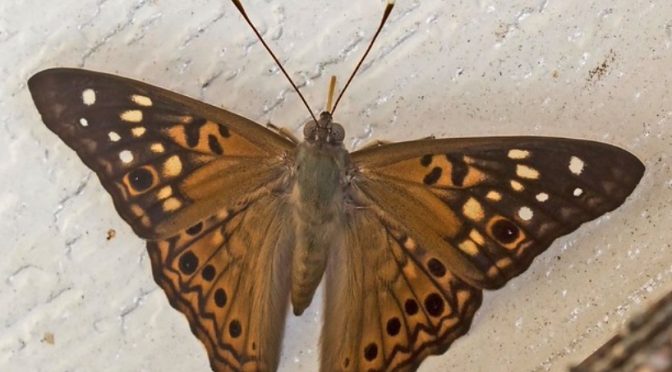 Wisconsin is home to roughly 150 species of butterflies. Some of these, like monarchs (Danaus plexippus), are well-known and easily recognizable. Other species can be more subtle in appearance (such as the “skippers”) or may not be particularly abundant. Nonetheless, we occasionally see localized “booms” of certain butterfly species from time to time. This year, the hackberry emperor butterfly (Asterocampa celtis) has taken the stage in some parts of the state.

In the last month, I’ve had more reports of hackberry emperor butterflies at the UW Insect Diagnostic Lab than any other butterfly species. These reports have primarily come in from southcentral and southwestern Wisconsin. In some cases, hackberry emperors have been spotted by the thousands as they covered rural roads or transformed backyards into temporary live butterfly exhibits.  Hackberry emperors primarily occur in southern parts of the state where the food plant of the caterpillars (hackberry trees) can be abundant; they’re also known from parts of central and west central Wisconsin.

Hackberry emperors are mid-to-large sized butterflies with a wingspan of approximately 2 inches. Their brownish-orange and black wings are somewhat similar to certain other butterflies (such as the “Satyrs”), which can make identifying them a bit more challenging to the uninitiated. Luckily, there’s a distinctive row of black spots on the wings—one distinctive spot on the topside of each forewing and seven slightly smaller spots on each hindwing. When the undersides of the wings are viewed (such as when the wings are folded upwards at rest), these black spots are bordered with a bit of yellow, giving them an “eyespot” appearance.  A close relative and look-alike, the tawny emperor (Asterocampa clyton), lacks the large black spot on each forewing.

Adults butterflies often serve as pollinators when they visit flowers for nectar, but hackberry emperors have slightly different behaviors.  They prefer to head to oozing tree wounds for sap or decaying plant materials in compost piles. They’re also fond of salts and can readily be spotted at puddles (a phenomenon simply known as “puddling”), at dung or carrion, lapping sweat from humans, or on roadways.

After overwintering as partially-grown caterpillars, hackberry emperors complete their development in late spring with two broods (batches of adults) in southern Wisconsin.  We see the first batch of adults in June, with the other in August, so we may see more of this species later this summer. If you’re located in southern Wisconsin, keep an eye out for these abundant butterflies in 2021.