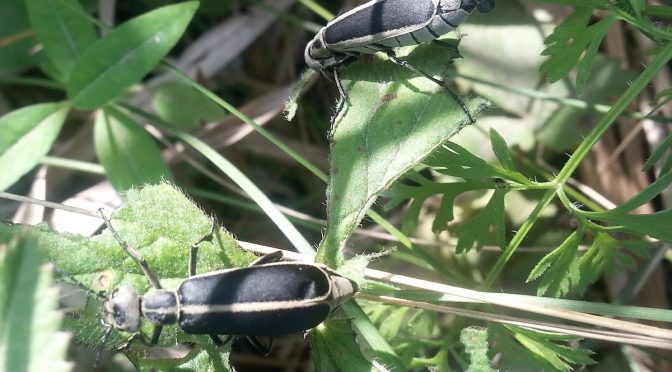 Despite being winter, Wisconsin has recently been in the news because of insects—blister beetles—and their potentially deadly impacts on horses.  In addition to their medical significance, these insects have a long and interesting story with some surprising twists.

Blister beetles comprise a diverse family of insects (Family Meloidae), with over 3,000 species known from around the globe. In the Unites States, we’ve got approximately 400 species, with the bulk of the diversity centered in the dry southwestern part of the country. However, this group is widely distributed across the lower 48 states, with nearly 30 species known from Wisconsin alone.

The common blister beetles species of the Upper Midwest are oblong and typically range from ½-inch to ¾-inch long, although other species can vary in size. Unlike the stereotypical “crunch” of most other beetles—think of accidentally stepping on a May/June beetle—blister beetles have softer bodies and are similar to fireflies in this regard. A few of our Midwestern species are striped or brightly colored, but many common species are dark-colored, being mostly black, grey, or a dark metallic green.

But don’t let their drab appearance fool you. Blister beetles wield a potent defensive toxin—cantharidin. In adult blister beetles, this compound is produced by males, which provide it to females during courtship. Females then use it to chemically protect their eggs.

The properties of cantharidin are well-known, and this chemical irritant and its coleopteran source have a surprising history dating back thousands of years. For example, Pliny the Elder knew of the toxic effects and mentioned blister beetles in his writings. Old medical reference books list a number of potential uses for cantharidin, ranging from the treatment of skin conditions to a supposed remedy for baldness. However, cantharidin might have harmed more than it helped. Dermal exposure has long been known to cause irritation and blistering—hence the common name of “blister beetles”. If ingested, symptoms can be much more serious: severe irritation of the gastrointestinal and urinary tracts, kidney and heart damage, and a cascade of other undesirable effects. Human deaths have been recorded in the medical literature and in a recent report, a soldier consumed a single blister beetle on a dare and ended up hospitalized with acute kidney injury.

Surprisingly, cantharidin was also historically deployed as an aphrodisiac—Spanish fly. In the days before the little blue pill, Spanish fly was known for its ability to irritate the urethral lining to produce a “stimulating” effect.  In one historical report, French Legionnaires in North Africa complained of priapism after feasting upon frogs that had happened to eat blister beetles (frogs seem to be unaffected by cantharidin).

Humans aren’t the only creatures affected by blister beetles and horses are especially sensitive. Ingestion of only a few grams of cantharidin can potentially be lethal to an adult horse. Blister beetle poisoning is rare in equines, but can occur if the adult beetles happen to be in an alfalfa field feeding on blossoms at the time of harvest and are crushed by farm equipment. In an unfortunate situation, blister beetles have recently been reported in connection with the deaths of over a dozen horses in Mauston, Wisconsin.

Blister beetles have another noteworthy Wisconsin connection from the history books. The former governor of Wisconsin, Robert “Fighting Bob” La Follette, was well-known for his progressive politics as well as an impressive head of hair. His secret?—a hair tonic containing cologne, oils of English lavender and rosemary, and a cantharidin-containing tincture made from blister beetles.

Beetlejuice on the brain?