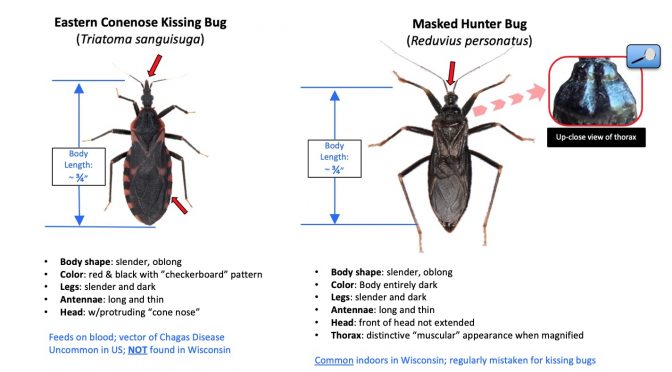 “I think I’ve found a kissing bug and wanted to report it” is a surprisingly common line I get at the UW Insect Diagnostic Lab.

I’ve previously written about kissing bugs, but to quickly recap: these are blood-feeding assassin bugs found primarily in South and Central America.  Kissing bugs tend to be associated with vertebrate nests outdoors but can bite humans and can also carry Trypanosoma cruzi—a parasite that causes Chagas disease.  Due to this concern, I see a spike in website traffic and “reports” of suspected kissing bugs just about any time there’s national news coverage of these insects. While many kissing bug species exist, the vast majority are restricted to tropical and subtropical areas.  The northernmost species—the eastern conenose kissing bug (Triatoma sanguisuga)—ranges from Latin America as far north as southern Illinois.

Insects don’t care for geopolitical boundaries, but when humans shade in the entire state of Illinois on a distribution map of kissing bugs, it gives the false impression that these insects are on the tollway marching towards Wisconsin’s southern border.  However, the eastern conenose kissing bug is rarely spotted in the northern parts of its range and there has never been a verified case of kissing bugs from within Wisconsin.

The regular occurrence of false reports can likely be attributed to hype in the news combined with a good ol’ case of mistaken identity.  It turns out that there are a number of common insects that can resemble kissing bugs.  One of these, the western conifer seed bug (Leptoglossus occidentalis), is regularly encountered in the upper Midwest because these insects sneak indoors in the fall just like boxelder bugs.  Recently, the commonest look-alike I’ve been getting reports of is the masked hunter bug (Reduvius personatus), which can also be encountered indoors.

If you aren’t familiar with masked hunter bugs, there’s a good reason why these insects can sometimes mistaken for kissing bugs—they’re technically kissing cousins.  Both kissing bugs and masked hunter bugs belong to the assassin bug family (Family Reduviidae).  This is a diverse family of approximately 7,000 species worldwide and we have dozens of common species in the Midwest.  The vast majority of these species (including masked hunter bugs) are really beneficial predators of other arthropods and are of little medical importance.  In theory, if you picked up and mishandled one of our Midwestern assassin bugs species, it could bite—likely feeling similar to a wasp sting—although that’s about the worst it could do.

Masked hunter bugs are readily identifiable, although the nymphs (juveniles) can have you scratching your head if you haven’t encountered them before.  The nymphs are often ¼” – ½” long and camouflage themselves with bits of lint and other debris—as a result, they can resemble miniature walking dust bunnies.  Once you recognize this disguise, they’re easy to identify.

When it comes to kissing bugs, we simply don’t have these insects in the Upper Midwest, but we do have look-alikes.  For side-by-side diagrams showing an eastern conenose kissing bug compared to common look-alikes, visit the ID Guide page on this website: insectlab.russell.wisc.edu/visual-id-guides/