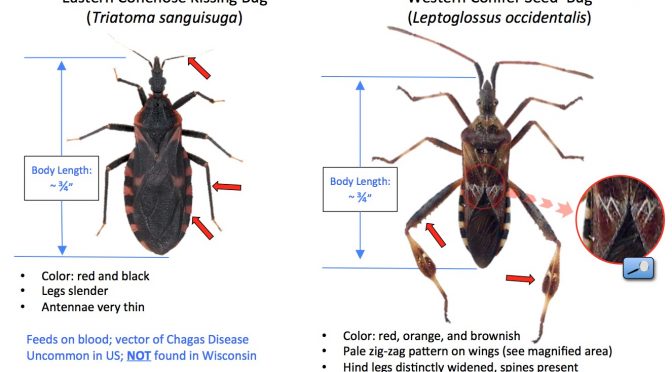 “Kissing” and “bugs”—two words you wouldn’t expect to be put together in the same sentence have been strung together rather frequently in the news lately.  No, this isn’t some poorly understood internet phenomenon amongst the youth of the country.  Rather, when you hear about “kissing bugs”, we’re really talking about a group of blood-feeding assassin bugs (Family Reduviidae, Triatoma species).

So what’s the story behind these insects and why the hype?
Kissing bugs are similar to bed bugs as they both feed on the blood of vertebrate hosts.  However, unlike bed bugs which have anthropophilic habits, kissing bugs are typically associated with animal nests in wooded areas.  Kissing bugs don’t go out of their way to sneak indoors, although if they do happen to wander in they can be attracted to the heat and carbon dioxide of a sleeping human.  When human bites do occur, it can often be on the exposed, softer skin of the face, hence the nickname of “kissing bugs”.  The biggest concern with kissing bugs is that under the right conditions they can serve as a vector of American trypanosomiasis (aka Chagas Disease), a serious disease that can lurk in the body and ultimately affect the heart and other organs.

What does the kissing bug story have to do with Wisconsin and the Great Lakes region?
In brief: not a whole lot.  While there are nearly a dozen species of kissing bugs in the western hemisphere, these insects are primarily found in rural Central and South America.  I recently spent some time amongst the Wisconsin Insect Research Collection’s  8 million+ specimens, and found no verified cases of kissing bugs in Wisconsin.  Technically, these insects have been found in some of the southern states, although they tend to be quite rare in the US and there isn’t any evidence to suggest that they’re expanding their range or increasing their numbers.  Unless you’ll be spending an extended amount of time in Central or South America, the threat posed by kissing bugs and Chagas disease is basically non-existent.  Overall, the hype about kissing bugs is more bark than. . .bite.

Think you’ve found a kissing bug in Wisconsin (or elsewhere)?
There are a few look-alikes that could potentially be confused with kissing bugs.  Boxelder bugs (Boisea trivittata) share the red and blackish coloration of certain kissing bugs, while the masked hunter assassin bug (Reduvius personatus) shares a similar body size and shape.  However, due to the slender body and similar “checkerboard-like” pattern around the abdomen , the insect getting confused the most with kissing bugs at the moment seems to be the western conifer seed bug (Leptoglossus occidentalis), which can be very common in Wisconsin and in many parts of the country.