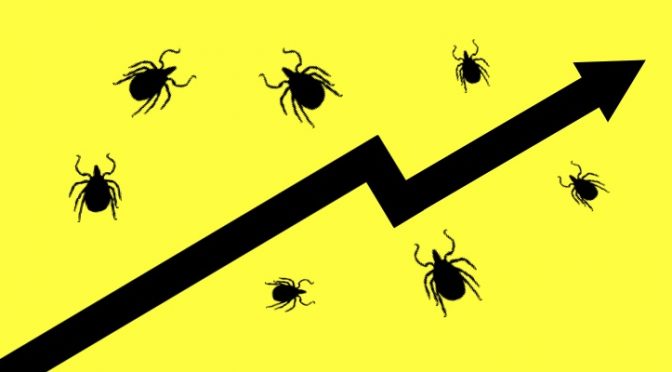 As stories about measles and vaccinations circulate in the news, it’s easy to lose track of other emerging health threats.  May is Lyme Disease Awareness month, and if you want to look at an emerging health threat particularly relevant to the Midwest, look no further than deer ticks and Lyme disease.

A Brief History of Deer Ticks and Lyme Disease:
The Lyme disease story is surprisingly new to Wisconsin and deer ticks are something that our grandparents didn’t have to deal with while growing up.  It wasn’t until the late 1960’s that our first deer ticks were documented in northern Wisconsin. At the time, this particular tick was known from more southern locations, so the first Wisconsin reports were noted as a curiosity in the scientific literature.  In actuality, this marked an early foothold of deer ticks in the region, which have spread rapidly.  Fast forward 50 years and deer ticks are widely distributed around Wisconsin and surrounding states.

Deer ticks are only one component of the Lyme disease equation. The spirochete bacterium Borrelia burgdorferi (or the closely-related B. mayonii) must be transmitted by these ticks to cause Lyme disease in humans.  Similar to the deer tick situation, Lyme disease has had an interesting recent history.  Research from the Yale School of Public Health suggests an ancient origin of Borrelia burgdorferi, but the first clinical cases of Lyme disease weren’t formally documented in the medical literature until the 1970’s.  At that time, an unusual cluster of juvenile arthritis cases with an accompanying rash helped researchers characterize the disease near Lyme, Connecticut*.  It wasn’t until the early 1980’s that the roles of deer ticks and Borrelia burgdorferi were recognized.

Skip ahead a few decades and the numbers for Lyme disease have increased steadily.  Today Lyme disease is the most commonly reported arthropod-borne disease in the US with over 40,000 confirmed and probable cases in 2017 alone.  Looking at Wisconsin’s statewide averages, approximately 20% of deer tick nymphs (juveniles) and 40% of adult deer ticks are carrying Lyme disease, which are alarmingly high percentages.

Tracking Ticks with Mobile Technology:
With the changing tick and tick-borne disease situation over the last 50 years, understanding the factors that influence where and when ticks are encountered is more important than ever before.  Researchers at the Midwest Center of Excellence for Vector-Borne Disease and the Northeast Regional Center for Excellence in Vector-Borne Diseases have teamed up to develop The Tick App—a mobile app to help gather critical clues to better understand human exposure to ticks.  The app, available in iTunes and GooglePlay, not only allows the public to contribute valuable data to tick researchers, but the app provides helpful tips on tick identification, activity, and precautions to take.  During the tick season, the researchers will also identify ticks from the images submitted in the app.

As we move into peak tick season, Midwesterners should be aware of ticks and take appropriate precautions to protect themselves [Recommended reading: the ABCs of Tick Season].  Learn more about The Tick App by visiting thetickapp.org or follow on Twitter @TickAppOnTour.

…An even earlier account of the Lyme-like “bullseye” rash was described in Europe by Arvid Afzelius in 1909.