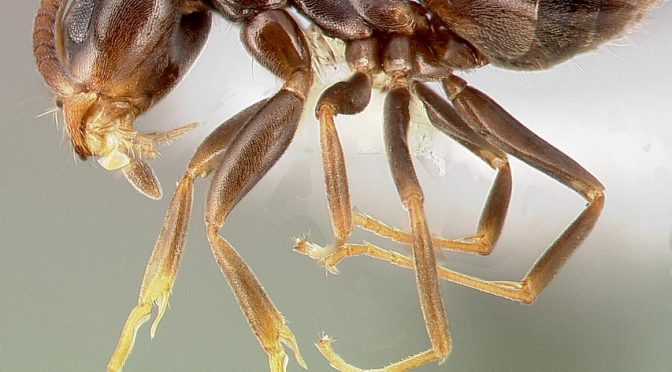 When it comes to ants at the UW Insect Diagnostic Lab, the top species seen at the lab include carpenter ants (Camponotus spp.), pavement ants (Tetramorium immigrans), and odorous house ants (Tapinoma sessile).  Odorous house ants were the most commonly reported ants at the lab in 2018, possibly due to the rainy conditions which can force these ants indoors in their search for food.

Identifying ants by sight and smell
The tiny brownish odorous house ant measures in at only an eighth of an inch long, but a few features allow for quick identification.  Ants are generally broken into two main groups depending on the numbers of bumps or “nodes” in their constricted waist.  Odorous house ants are considered “one node” ants, although their single node is flattened and is hidden from view by the gaster (sometimes mistakenly referred to as the “abdomen” of ants).  This is strikingly different than other ants, such as carpenter ants or field ants, where the single upright node can even be visible to the naked eye.  This flattened node of odorous house ants is a key identifying feature but does require magnification to interpret this trait.

Interestingly, the easiest way to identify these ants isn’t by sight, but by smell.  Identifying insects by smell may sound odd, but can be a quick and dirty way to confirm the identity of this ant species, and a few other ants like citronella ants.  When squished, odorous house ants have an odor reminiscent of coconut, although some say rotting coconut or even blue cheese.  This scent fades with older, dried-out specimens but is usually quite noticeable in fresh ants.

Country ant, city ant:
Odorous house ant colonies occur both indoors and outdoors in the Midwest, but the overall location of these ants in the landscape can have a drastic influence on colony structure and behavior.  In natural areas (such as forests), odorous house ant colonies tend to be small (often <100 workers) and the ants are generally “well behaved”.  In urban areas, these ants can produce much larger populations with multiple queens, tens of thousands of workers and many different nesting sites. They can behave like an invasive species in such situations.

When it comes to their nesting habits, odorous house ants don’t produce mounds like other common ants.  Instead, these ants are fond of preexisting cavities—small hollow voids beneath rocks or man-made objects, amongst log piles, fallen leaves, mulch beds, or similar spots.  I’ve even seen them take advantage of the cozy space inside of a fake rock “Hide-a-Key” on several occasions!  Indoors, odorous house ants like to nest in hollow cavities such as wall voids, especially if a moisture source is nearby.  These ants can also easily wander indoors when foraging, making them a common indoor nuisance invader.

Got dessert?
In addition to their essence-of-coconut scent, odorous house ants are also known for having a notorious sweet tooth.  Ant species vary quite a bit in their food preferences, with certain ants seeming to favor the “keto diet” with a strong preference for proteins or fats.  In contrast, odorous house ants have a particular fondness for carbohydrate-rich materials, such as honeydew from aphids, nectar from plants, or sugary human foods.  As a result, these ants routinely invite themselves to picnics and into kitchens.  However, their sugar-loving ways can also be their Kryptonite and odorous house ants usually respond well to sugar-based baits when they do find their way indoors.