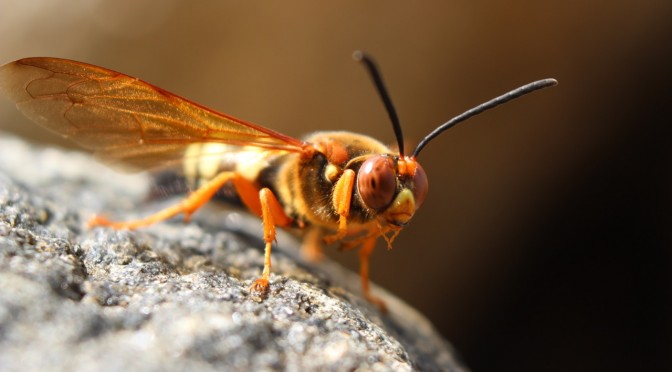 It’s summer and large wasp zips past.  A quick Google search has you convinced you’ve discovered an Asian Giant Hornet (aka “murder hornet”). . .except they don’t occur in our area.  What’s you’ve likely encountered is a common, native insect known as the “cicada killer“.  They can be surprisingly in Wisconsin and much of the Midwest and are surprisingly docile—unless you happen to be a cicada, but I’ll get to that later...

The things entomologists do for the sake of their curiosity:

This past Wednesday I found myself thinking about Hollywood Horror Films while crouched along a hot sunny rock wall on the UW-Madison campus patiently waiting for one of our largest wasps to land mere inches from my face. What gives?  Cicada Killers: One part cold-blooded killer, one part flying teddy bear (check out how fuzzy that thorax is!).

Part of their basic biology plays out like a B-Class horror movie: a victim (cicada) is injected with an incapacitating chemical before being dragged to an underground lair and left to be eaten alive. While it sounds bizarre, this is actually fairly common in the insect world and there are many examples of wasps that paralyze their prey and haul them off to their nests in the ground to feed to their young.  (One of my favorites is the Zombie-making “emerald cockroach wasp“)

Sometimes pushing two inches in length, cicada killer wasps (Sphecius speciousus) are amongst our largest wasps in the Midwest and resemble large yellowjackets. They specialize in tracking down and attacking cicadas, which the females haul back to the nests they had previously dug in patches of bare soil. Despite their “killer” habits, these insects are usually quite docile and non-aggressive towards humans. Unlike their smaller yellowjacket cousins which have a large colony to defend, cicada killers are solitary nesters. You can actually get within inches of them without provocation, although the territorial males may fly around to check you out.

Cicada killers can be common in the state and also happen to be common on the UW-Madison campus. You can often find them near some of the dorms along the Lakeshore bike path and also in the rock wall along the Linden Drive pull-off near the Nutritional Sciences Building (just in case you’re in the mood to meet them up-close and personal.) . They’re also common many other places in Wisconsin and the eastern US in areas with sandy soil.

In the mood for an actual horror movie involving giant predatory wasps? The recently released “Stung” might be perfect for you. . .

If you’re looking for additional information on Asian giant hornets and their look-alikes in our area, check out this post.