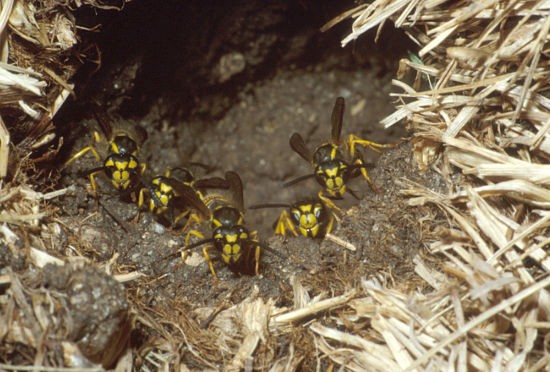 It happens every year in August and September: someone takes their lawnmower over a nest in the ground and really “stirs up the hornet’s nest”.  Shortly thereafter, I get a call regarding these black and yellow stinging “ground bees”.  Technically, these nests are neither the work of hornets nor bees, but rather yellowjackets. [There are actually ground-nesting bees, although they tend to be docile, solitary creatures; see this post from April].

Yellowjackets are a type of wasp, related to paper wasps and bald-faced hornets—all of which can be abundant this time of the year.  In fact, wasps are one of the most common insects reported to the diagnostic lab in late summer each year.  Depending on the species, yellowjackets (Vespula species) can nest in pre-existing cavities in the ground, above ground, or in hollow voids (such as wall voids and soffit areas of roofs).  Bald-faced hornets (Dolichovespula maculata) are the larger cousins of our common yellowjackets, and can produce basketball-sized papier-mâché style nests that can often go unnoticed until the leaves fall off the trees in fall.  Paper wasps (Polistes species) are more slender in appearance than yellowjackets and build the open, umbrella-like nests that often hang from soffit areas.

Yellowjackets, bald-faced hornets, and paper wasps are what we refer to as social wasps, meaning that they live and work together as a colony.  Each species varies in its particular traits (body size and coloration, nest location, colony size, etc.) and we have dozens of species in our area.  An interesting point about the biology of social wasps is that a queen starts her colony from scratch each spring and the colonies die out in the fall.  A small group of females designated to become queens the following year does make it through the winter in sheltered locations such as rotting logs.  The tiny colonies from spring build up in size throughout the summer, reaching their maximum size this time of the year.  This can give the impression that the insects appeared abruptly, when in reality, the colonies have been there and the wasp populations have built up rapidly over the past few weeks.

Because the colonies die out in the fall, if a wasp nest is located in an infrequently visited back corner of your yard, simply waiting for a few hard frosts will ensure that the colony has met its demise.  If a colony is located in a spot where you’ll likely have run-ins, there are some reliable ways to eliminate them, but choosing the correct tool for the job can be critical!

To learn more about the biology of social wasps as well as how to manage wasp nests, check out this webpage: https://extension.umn.edu/insects-infest-homes/wasps-and-bees