Just like the bees, the beloved Monarch (Danaus plexippus), is facing declines in North America.  Unlike the bee declines, which seem to be the result of a complex amalgam of factors, a major factor jumps out when it comes to monarch declines: habitat loss.  Simply put, we’ve gotten rid of much of the formerly ubiquitous milkweed in the Midwest.  There’s a number of reasons for this, ranging from continued land development, farm subsidies that have resulted in the cultivation of non-crop land, and heavy use of herbicide resistant crop varieties.  One scientific report suggests that the Midwest has lost nearly 60% of its milkweed over the past fifteen years.

We all probably learned the general story of the monarch in elementary school: a spring northward migration, milkweed, eggs, more milkweed, striped caterpillars, even more milkweed, orange and black butterflies, and finally migration down to Mexico after a few generations (there’s a great migration video here).  It’s bad enough that the sole summer food source of the monarchs (milkweed) has been disappearing, but monarchs are actually fighting a multi-front battle, as their overwintering habitat is disappearing as well.  Over the past few decades, much of the overwintering territory in Mexico has been lost, degraded, and fragmented by logging (both large and small scale).  What’s really concerning is that the overwintering territory isn’t all that big to begin with, making the insects vulnerable to extreme weather events.  A brutal winter storm in January of 2002 killed roughly 75% of the monarchs at some overwintering sites.  If monarchs keep getting squished into smaller and smaller areas, all it could take is a few bad winter storms to crash their numbers. Talk about putting all your eggs into one basket. . .

So why the fuss about monarchs now?
Over the past two years, the number of monarchs overwintering in Mexico has been the lowest in the history of the annual surveys. 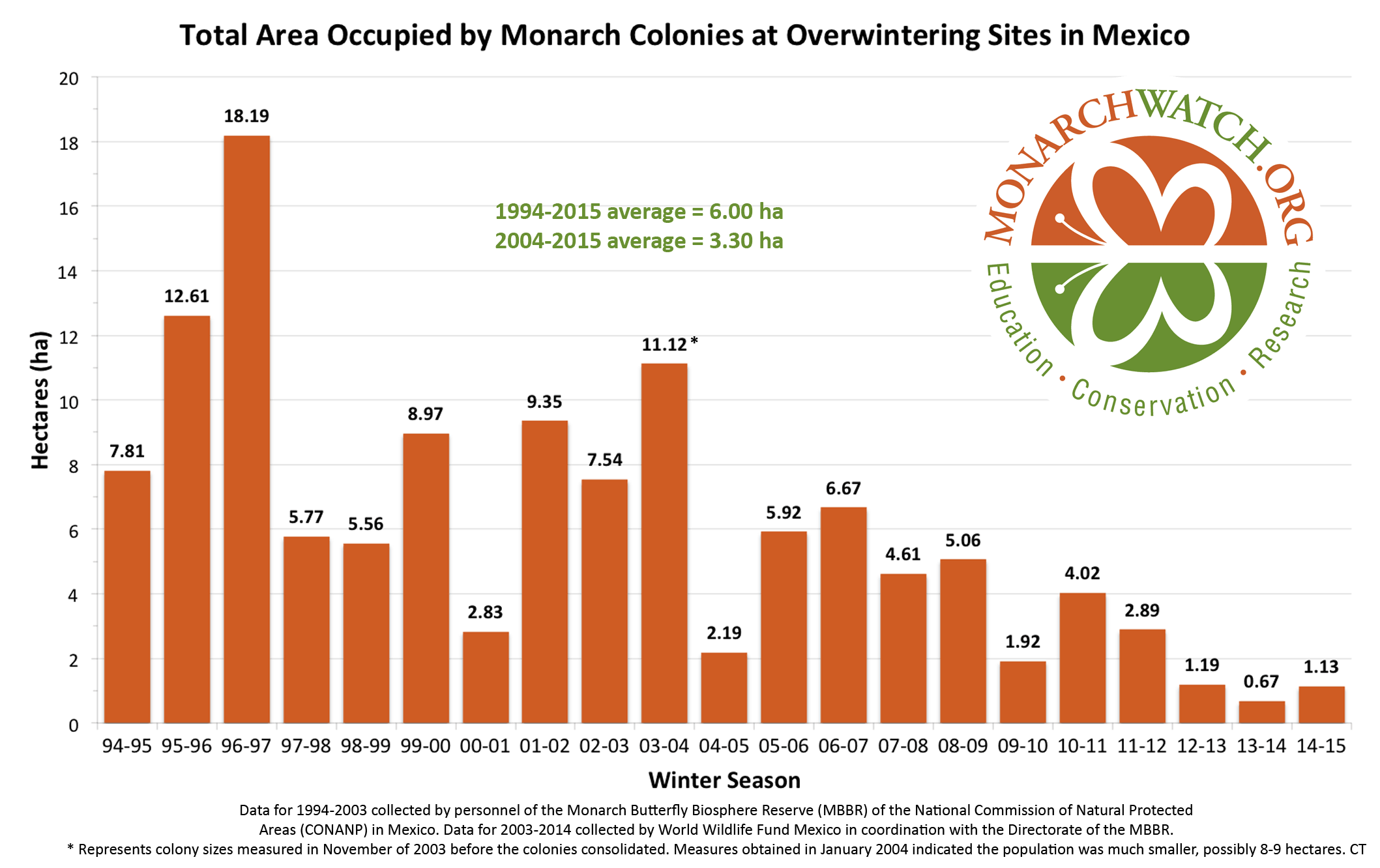 With enough support, could we also pull the iconic monarch out of harms way?  Having the assistance of the President of the United States certainly helps.  Just yesterday, the white house announced that the Pollinator Task Force (created in 2014) has released its plan to help pollinators.  The three main goals of the plan are: 1) reduce honey bee losses to sustainable levels, 2) preserve the monarch population in the US, and 3) increase and improve pollinator habitat (full details here).

This isn’t the first time we’ve recognized a species at risk and created a recovery plan.  A classic success story: the iconic bald eagle.  It’s estimated that in the mid 1900’s there were just over 400 pairs of bald eagles left in the contiguous US.  These days, anyone passing through Sauk City, can tell you bald eagles have certainly rebounded.

While the Pollinator Task Force’s plan will take some time, there are things we can all do to immediately provide assistance for monarchs:
1) Plant milkweed to create a habitat for monarchs
2) Get involved with citizen science projects to educate ourselves and others
3) Use caution when using pesticides in the landscape to minimize impacts to monarchs, bees, and other beneficial species