Caterpillars, and the moths and butterflies they become (Order Lepidoptera), normally make up less than 20% of the cases in the diagnostic lab, while beetles (Order Coleoptera) usually make up the largest chunk of the pie (almost 30%).  However, spring often tells a slightly different story around the lab: 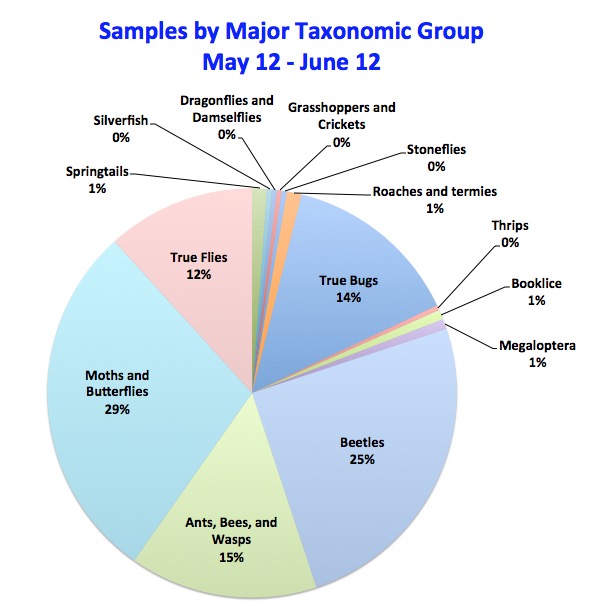 So what does this mean? Well, as far as caterpillars are concerned, it’s been a great spring in Wisconsin. Perhaps you’ve even noticed some happily munching on the trees and shrubs in your yard. If you’re curious to meet the culprits, there’s a good chance they’re on this list:

Of all the caterpillar species that have popped up this spring, the speckled green fruitworm (Orthosia hibisci) has been the biggest surprise. It’s usually present, but in low enough numbers that damage isn’t common. Despite having the word “fruit” in its name, this species feeds on more than just fruit trees—it also feeds on a long list of hardwood trees and shrubs and even some conifers. This spring I’ve had reports of it damaging: maples, oaks, hackberry, lindens, elm, serviceberry, apple, spruce, peonies, roses, and other plants.

The humped green fruitworm (Amphipyra pyramidoides), has a similar feeding pattern to its speckled cousin and has also been common this spring. An interesting thing about the green humped fruitworm is that the caterpillars turn into copper underwing moths. Perhaps that name sounds vaguely familiar? If you’ve been following this blog, you may remember the invasion of the copper underwings from last summer. It’s too early to tell, but with the numbers of green humped fruitworm caterpillars I’ve been seeing, I wonder if we might see the copper-colored adults sneaking into buildings again in the coming months. . .

Like the fruitworms, the linden looper (Erannis tiliaria; a type of inchworm) and the nefarious gypsy moth (Lymantria dispar) also feed on a wide range of plants and have been popping up this spring. I haven’t had any reports of large-scale significant defoliation by gypsy moth, but there are pockets of damage and gypsy moth certainly seems to be more active than last year at this time. Hopefully with the rains we’ve had lately, the fungal disease, Entomophaga maimaiga, will pop up to smack down the gypsy moth numbers.

Lastly, if you’ve got a burning bush (Euonymus alatus) or another type of euonymus, you might have noticed some webbing on your plant from the euonymus caterpillar (Yponomeuta cagnagella). In some cases, the webbing from these polka-dotted caterpillars can cover the entire plant, making you think that giant mutant spiders have taken over. Complete defoliation can occur with this species, but thankfully, most healthy plants leaf out again and are generally fine.

Now for some good news: while all of these spring caterpillars have the potential to significantly damage plants, they only have a single generation per year—meaning that they’re just about done wreaking havoc for the year in the southern part of the state. That’ll give us just enough time to get ready for the next batch of insects coming up soon: squash vine borer, squash bugs, Japanese beetles and many more!