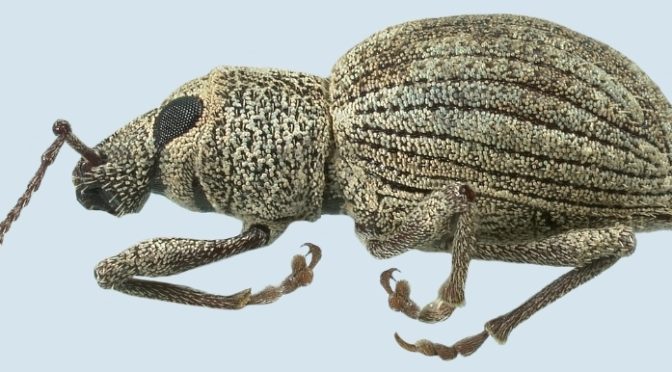 If you’ve spotted small, crunchy beetles in your home this summer you aren’t alone.  Broad-nosed weevils (Curculionidae: Entiminae) have been a surprise this summer at the UW Insect Diagnostic Lab.  While I see cases of these insects every year, things have been a bit more intense this summer with a flood of reports from around Wisconsin.

What’s a weevil?  Out of the 100+ different families of beetles, the weevils (Family Curculionidae) are extremely diverse with over 50,000 species in this group alone.  In terms of their appearance, most weevils might remind you of Gonzo from the Muppets with their very pronounced “snouts”.  A great example of this in Wisconsin is the genus Curculio (the “nut and acorn weevils”).  Some species in this group can have a snout (technically “rostrum”) as long as the rest of their body.

On the other hand, some members of the weevil family lack the pronounced snout .  One such group, the subfamily Entiminae, is commonly referred to as the broad-nosed weevils.  Our common broad-nosed weevils tend to be small (around ⅛ – ¼ inch-long) and have pear-shaped bodies with very hard, crunchy exoskeletons; they also have “elbowed” antennae similar to ants.  The color of the broad-nosed weevils can vary by species, but many are blackish or grayish.

When it comes to broad-nosed weevils, we have over 100 species in the Midwest alone.  In general, these are “outdoor” species associated with plants.  The larvae tend to feed on the roots of plants while the adults often chew small notches out of the edges of foliage.  Interestingly, a few species in this group have the habit of sneaking indoors during the summer months.  Once inside, these insects are completely harmless but can be a minor nuisance as they seem to mindlessly wander on walls or floors.

Conditions in Wisconsin over the last year and a half must have been just right for some of these species, since I’ve had a flood of requests to help identify broad-nosed weevils in homes and other structures during the summer of 2022.  Often when I see “weevil” cases it’ll be a handful of weevils indoors, but this year I’ve also seen plenty of reports of large numbers of weevils (hundreds or thousands!).  The top three species I’ve been seeing in Wisconsin have been the strawberry root weevil (Otiorhynchus ovatus), the imported longhorn weevil (Calomycterus setarius), and the black vine weevil (Otiorhynchus sulcatus).  There are a number of other species in this group that can invade structures as well.  Due to the similar appearance of these beetles, it’s often necessary to get a sample under the microscope to help confirm the exact species.  If you come across broad-nosed weevils in your home and want to know the exact type, feel free to send in a sample to the UW Insect Diagnostic Lab: insectlab.russell.wisc.edu/samples.

While these weevils can be a bit of a nuisance, there usually isn’t much of a need to spray (especially indoors).  In the grand scheme of things, good physical exclusion (i.e., sealing things up better with caulk, expanding insulation foam, better weatherstripping, etc.) can go a long way to help prevent broad-nosed weevils from getting indoors in the first place.  For the weevils that do make it indoors, insecticide really aren’t necessary and sweeping or vacuuming up these slow-moving pests is the best course of action.