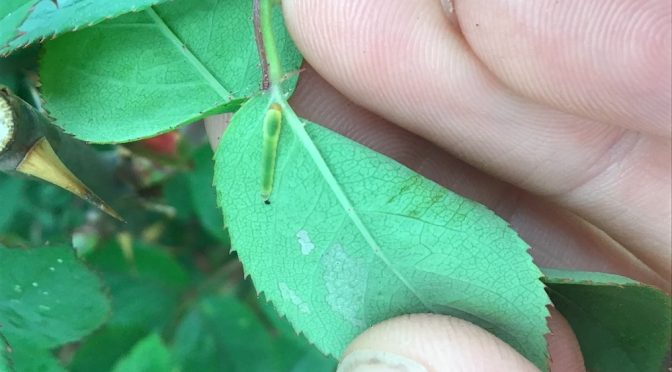 If you’re seeing insect damage on your roses this spring, you aren’t alone and there are a number of early-season insect that can catch our attention.  For example, a number of caterpillars can occasionally be spotted on roses in spring, such as the rose plume moth (Cnaemidophorus rhododactyla).  There’s also the non-native rose leafhopper (Edwardsiana rosae) which can cause faint speckling on leaves. Later in the growing season, rose chafers (Macrodactylus subspinosus) and the notorious Japanese beetle (Popillia japonica) can be a concern.

Perhaps the most noticeable damage to roses in spring is caused by the larvae of sawflies.  These insects cause two types of damage: “windowpane” damage when they only feed partway through foliage and leave the upper leaf surface intact or small holes or notches when larger larvae chew entirely through the leaves.  In the Midwest, there are three different species of sawflies that can commonly be encountered on roses in spring: the roseslug sawfly (Endelomyia aethiops), the curled rose sawfly (Allantus cinctus), and the bristly roseslug sawfly (Claudius diffiformis).  To the naked eye, the larvae (up to ~ ½ inch long, pale greenish, and caterpillar-like) and the adults (~ ⅓ inch long, dark-colored, and wasp-like) all look similar.  However, determining the exact species under magnification can be helpful to understand the potential impacts on your roses.

The roseslug sawfly (Endelomyia aethiops) is the commonest of the three sawflies that I see samples of at the UW Insect Diagnostic Lab.  The larvae of this species have a smooth texture and brownish head capsule; their bodies are translucent and they usually have a pale greenish color due to ingested green leaf material.  Some good news about the roseslug sawfly is that this species only has a single generation in spring.  Their damage tends to be mostly just a minor cosmetic issue.  As the plants really take off in late spring, they tend to “shrug off” this damage and it’s quickly covered up by new growth.

The curled rose sawfly (Allantus cinctus) goes through two generations early in the growing season.  Similar to the roseslug sawfly, their feeding damage tends to be minor and plants are usually able to chug along just fine.  The larvae of the curled rose sawfly also are pale green with a brownish-orange head capsule.  They do have tiny spots on their bodies, but these are only visible under high magnification.  This species tends to feed while curled up and they also chew notches on the edges of leaves which can help distinguish this species from the other two sawflies.

The third sawfly commonly seen on roses also tends to be the most problematic—the bristly roseslug sawfly (Claudius diffiformis).  Unlike the first two sawflies, this one can continue to reproduce throughout the growing season.  Because they go through many generations per year, their damage can accumulate over time and tends to be more notable.  Like the other two sawflies, the larvae of this species are also pale green with a brownish head capsule, but they are covered with fine, hair-like bristles when viewed under magnification.  Very few sawflies have a hairy or bristly appearance like this, which helps distinguish this species on roses.

If you do bump into these sawflies on your roses in spring, they’re pretty easy to deal with.  Options for managing them include: