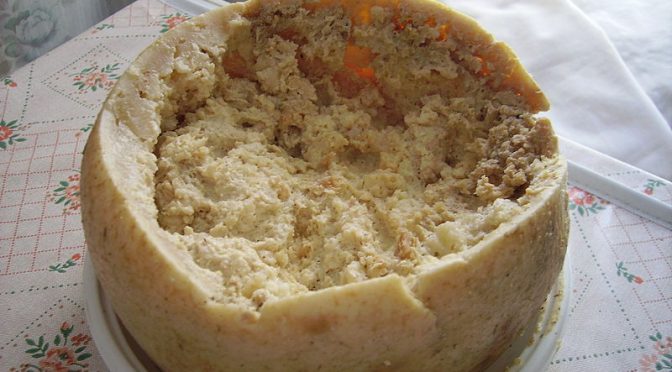 As National Dairy Month rolls to a close, you might not have realized the connections between insects and the milk, cheese, yogurt, or ice-cream you’ve had in the last month.  While you might not think of any association between insects and dairy, the connections are surprisingly plentiful.  Some of these links are conspicuous—insect pollinators, for example, play an important role in the production of seeds for growing hay crops like alfalfa.  A plethora of caterpillars, beetles, and true bugs can be pests of those same crops and threaten to reduce hay yields.  In addition, many flies, mites, and grubs can directly bite, pester or even infest dairy of beef cattle and farmers have to manage these pests to maintain herd health and maximize milk or beef production.

Other connections can be downright bizarre—perhaps the most outlandish link between insects and dairy is a cheese so engulfed in a legal cloud that it has been sold on the black market at times: casu marzu.  In Wisconsin we’re blessed with enough cheeses to be the envy of other states, but the thought of an illegal cheese is still mind-boggling.

The cheese in this case, casu marzu, is a soft unpasteurized variety made from goat’s milk.   It’s made on the Island of Sardinia in Italy and has a unique flavor developed by live maggots of the cheese skipper (Piophila casei)—making blue cheese seem wimpy in comparison.  Cheese skippers like to infest protein-rich materials such as processed cheeses and meats (they’re also called “bacon flies”) and get their name from the ability of the larvae to “skip” or fling themselves into the air when disturbed:

While cheese skippers have a cosmopolitan distribution, you probably won’t encounter these insects unless you add dairy, meats, or other protein-rich materials to your compost pile (which you shouldn’t do).  This very composting mistake is the reason why I recently received a cheese skipper sample at the UW Insect Diagnostic Lab.