Below you’ll find the third and final part of a series describing the Top 10 insect-related stories of 2014 from Wisconsin.

4) Hexagenia Mayflies and Fishing Spiders: If you love insects and/or fly fishing, you might have been thrilled to hear about the massive mayfly hatch along the Mississippi River in late July. These emergences happen yearly, but the mass emergence in the evening of July 20th was one of the largest in decades. We’re not talking about thousands or millions of insects, but billions of insects emerging at the same time. So many mayflies emerged simultaneously that the insects showed up on National Weather Service weather radar (a history of these events can be found here).  When these emergences occur, the insects can accumulate on bridges and streets making roadways slippery.

The insect involved is the Hexagenia mayfly. The young (nymphs) live in the sediment at the bottom of the Mississippi River and feed on bits of organic matter in the water. The presence of the adults above water is truly an ephemeral phenomenon; it’s even reflected in the name of their group: the Order Ephemeroptera. Adult Hexagenia mayflies only live for a matter of hours, which leads them through a frenzied courtship period. Shortly thereafter, they’re done for.

Around the same time as the mayfly emergence, the fishing spider stories made their way around television, radio, and Facebook and the phone calls and emails came flooding in. Despite the hype, fishing spiders are native to Wisconsin and can actually be fairly common. Fishing spiders aren’t truly aquatic, but they do tend to hang out near water. They’re among our largest spiders in the state, and can be large enough to capture and feed on small minnows.

3) Spotted Wing Drosophila: One of our newest invasive species had another strong year in 2014. The spotted wing drosophila (SWD) is originally from parts of Asia, and was discovered in the US in 2008. Within two years, it had popped up in Wisconsin. Like other fruit flies, SWD loves fruit.  The main difference is that our run-of-the-mill fruit flies lay eggs in overripe or spoiled fruit.  In contrast, SWD females have a hacksaw-like egg-laying structure, which can be used to slice into ripe or ripening fruit to lay eggs. As a result, SWD has become a major issue for fruit growers in the state.  Late-season berry crops (raspberries, blackberries, strawberries) are hit the hardest. SWD has been found statewide, and will continue to be a major concern for late-season fruit growers for the foreseeable future.

2) Pollinators: You don’t have to listen to the news very long before you hear a reference to pollinators. Unfortunately, much of the news on the topic paints a bleak picture: pollinators of all kinds are in decline at the moment. Honey bees, bumble bees, other native bees, and butterflies like the Monarch are all facing declines. Unfortunately, it’s not a black-and-white situation, and there’s no simple solution to the issue at hand. Instead, many different factors, such as habitat loss, diseases, parasites, land-use practices, pesticides and other factors may all be involved one way or another.

We may not think of the connection to pollinators when we visit the grocery store, but without the pollination services of insects, the produce section would be scarce. It turns out that roughly a third of the world’s agricultural crops rely on pollinators. Without pollinators, you’d have a hard time finding apples, strawberries, melons, tomatoes, and many of our common food items.

If there’s a silver lining to the situation, it’s that attention has been brought to the topic. In June of 2014, the White House announced the creation of a pollinator health task force to develop a national strategy to help prevent pollinator losses and help improve pollinator habitat.  While it may seem like a small step, individuals can help pollinators by making their own yards pollinator friendly. Incorporating native plants into the landscape, providing nesting habitat for solitary bees, and using caution with pesticides are all ways to help pollinators in our own yards.  Tips for accomplishing this can be found here.

1) Emerald Ash Borer: The emerald ash borer (EAB) continues to be one of the biggest insect stories in the state. This invasive pest is originally from Asia, but has been wreaking havoc on Wisconsin’s ash trees since 2008. Spread within the state seemed to progress slowly at first, but 2014 saw dramatic changes in our quarantine map in the state. In early 2014, we had a total of 21 Counties quarantined for EAB. By the end of the year, 16 additional counties had been added to the map to bring the total up to 37 counties. While most of the quarantined counties are in the southern half of the state, Douglas and Oneida counties in the north are also quarantined. Unfortunately, this destructive pest is difficult to detect and easily transported in firewood, which means that this pest will only spread and the situation will worsen over time. While we have options to protect individual ash trees (available here), we don’t have a way to protect ash trees in woodlots or forested areas. Since its introduction into the US, the emerald ash borer has killed tens of millions of ash trees. With over 700 million ash trees in the state, Wisconsin has a lot at stake. 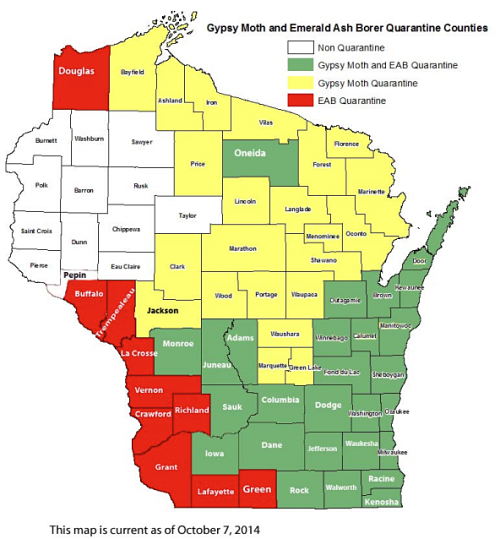